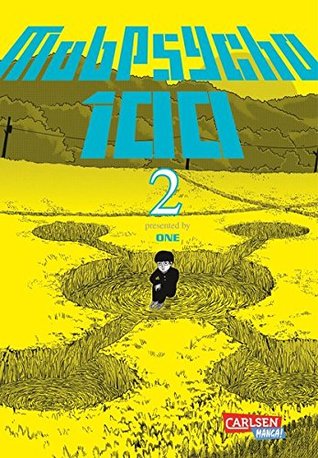 It is time for the Teru x Mob battle! Or well…. Teru going all out and Mob just trying to hold himself in.

This was definitely one of the volumes I was most looking forward too, as we not only see Teru x Mob, but also get more information on why Mob is holding himself in (and no, not only because of Reigen and his silly speech).

In this one we finally meet Teru (who just like Mob has powers… but he doesn’t hold himself in and doesn’t really use his powers for good + he has a big obsession with his hair), Mob has been taken prisoner by a gang of another school (which is such a terrible idea, and not only because of his powers but also because his muscle club quite likes him). Things go from bad to OMG battle royale, and that is even without the influence of Teru. Teru comes in a bit later and then things go from battle royale to RIP the world.

I did want to shake Mob though. I get that he wants to hold himself in for reasons, but I still wish he would get a bit more active instead of being emotionless about everything. You don’t need to go full out, just use it a bit. And not just for defence. His emotionless state and how he is refusing did get on my nerves. 😐

This book also brings the start of what later will be a big arc about Mob’s brother. We see that he loves his brother but is fairly pissed that Mob just doesn’t use his powers. And I can imagine, you see someone with so much power, while you have none. And then they don’t do anything with it.

Bonus points to the pricing of these series in German. 6.66 euro. Perfect number!

The art? Still pretty terrible with the exception of some scenes. But again, like I said with the first volume, I don’t mind it that much. If anything it makes the series even more funny and hilarious. Plus I can’t wait to see if his art gets better as time passes.

I am a bit sad that the volume ends on a cliffhanger, guess I will have to buy the next book soon as I want to see Mob kick some serious butt. 😛

All in all, a pretty fabulous and exciting volume and I flew through it.