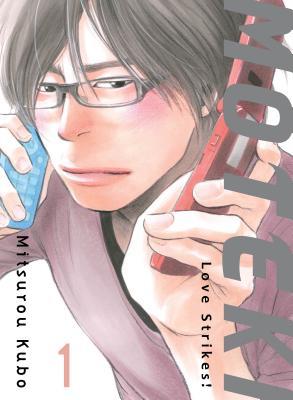 Welp, this was just the worst. I am sorry, but I didn’t enjoy it. I kept reading in hopes that it would get better, but instead it didn’t. It also didn’t help that this book isn’t volume one only… it is also volume 2. If I had known that I would probably not have requested it.

What the problem was with this manga? The MC. My word, he was just terrible, depressing, at times he didn’t seem to understand the word no (sure, just keep kissing and putting your hand up her shirt while she clearly stated no and wants to be your friend), and he was also creepy (really, taking a picture of a sleeping girl?), and I could go on. I didn’t like him at all. He just kept whining about not having a girlfriend, about his virginity (which he did lose), about his sex life, about woman.

What did I expect? A cute romance story with a guy getting into his Moteki (some magical period in which guys/girls get very popular) and him deciding which girl he wants to go for from the whole batch of girls interested in him. I expected lots of hilarity as girls would try to meet him at every opportunity. I had hoped for lots of sexy and swoony scenes.
Instead the only thing that happens is that girls are vaguely interested in him, he gets a ton of mails/calls (at first), and well… that is it.

It was a really depressing read, and I just wanted to kick the MC between his legs for being such a dick about stuff.

Sure, the girls aren’t always better, I also wanted to shake some of them.

The only thing that I did like was the art. That was pretty gorgeous.

But yeah, I am not going to be reading this one any further, and I am happy I had the chance to read this one before it released as I now know I will not be buying this one for my collection.

One thought on “Review for Moteki Vol.1: Love Strikes”