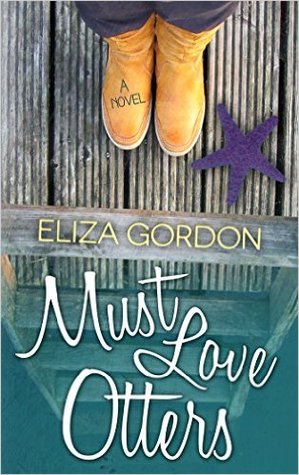 “Plus no one hands me a beaver or a moose or a flask of maple syrup. I thought that was part of the deal. Americans, when you go to Victoria, British Columbia, they don’t give you syrup.”

So I first started reading the second book, though I didn’t know it was the second book! But eventually I just decided to check Goodreads if any books by this author that mentioned a bit more about Holly. And thus I came across this book.

This was such a sweet, delightful, hilarious, silly, wonderful read. I just adored every page, laughed, but also rooted for Hollie.

Because Hollie’s life isn’t the easiest, though that is also a bit to do with herself. While inside she is sure of what to do, in real life she keeps making silly mistakes, is afraid to speak her mind. Like with her relationship with Keith. She knew their relationship was in a dead end, yet she stayed with him even though he annoyed her to death (and not to mention the incestuous yorkies that got everywhere). I was definitely happy when she finally broke it off with him. Can you imagine the last straw was because he deleted her shows? 😛 And come on the guy burned off your nipples because he thought it would be cool to make nachos on your naked body. snorts And yes, this really happened. Sexy time all around, right?
Then there is her work that just frustrates her and also makes her quite unhappy. She is a dispatcher at 911 and her work isn’t the most fun. People die, her co-workers are crappy (and one was especially annoying, because why in heaven’s name are you keeping track of when someone dies and who was the dispatcher?), the management sucks (I get that someone died, but Hollie did all she could to help that people yet she gets reprimanded?).
Did I already mention the demon goat her dad has at his home? Or her missing mother? Or the downstairs old bat of a neighbour who keeps asking for all sorts of stuff.

Yep, Hollie is ready for something brand-new, something to refresh her life, time away from all of this crap. Thankfully, her dad just gifted her a luxurious resort appointment (officially meant for her and Keith). And I was so happy that she just went to do it. Didn’t wait, didn’t think to much about it, but just went off. Even though it did start with hilarity as Hollie, in a very intoxicated state, calls the resort and talks to a guy named Ryan there. She spills all the beans about everything that happened, and well, thanks to the second book I just knew this had to be THE Ryan, and I was squeeing.

Her resort time balances between Hollie please what are you doing (getting stuck outside naked and having to go to the front desk for instance) and ooohhhh hot guy alert! We also read about the various fun stuff there is to do in the resort, the gorgeous scenery (I really want to go there), the spa, and much more!
I did feel sorry that she fell down and her ankle was sprained, meaning that she had to take it easy. Poor girl. All she wants is to just let go of everything, just have a moment for herself, and instead has to hobble around.

Not to mention mister hot date… well, no I am not going to tell you. I just will tell you this, I wanted to kick him in his balls. 😐

At first I didn’t quite like Ryan. He was just a bit too bossy for me, seemed to be very close by when Hollie needs him, plus he always had a judgement ready. But he definitely improved as the story continues and I started liking him more and more. I could see that he just cares about Hollie, and that he wants her to be happy/safe.

In the end I was really rooting for them to be together. They made such a cute pair, and I just wanted them to share some kisses (and more!).

The ending was just brilliant, I just loved every bit of it. I was happy for Hollie and I was cheering for her! And then came that one part and I just felt tears pop up. Awww!

Oh and before I forget, I just adore Hollie and her love for otters! Otters are the best.

There were a few instances that I wondered if it was a deliberate error or something else. Like Nekked (who the hell says Nekked?) or Monies.

But all in all a very big OMG you need to read this to everyone! If you are in the mood for a cute, hilarious read with a wonderful (but silly) protagonist and sweet romance, be sure to check out this book.

And now I can finally continue with book 2! dances