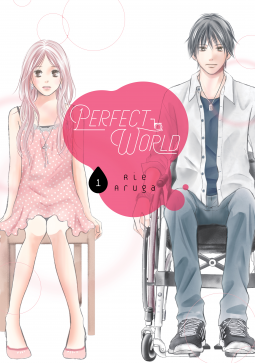 Ahhhhhhhhh, this was just fabulous, sweet, heartbreaking, beautiful. Really, I would warn everyone to bring tissues when you are reading this one. You will need those. Tears were just streaming down my cheeks while reading. I am still all teary from this beautiful volume.

Tsugumi reunites with her crush from high school, Itsuki, during a get-together from her firm (interior design) and his firm (architecture). She is happy to see him and her love is immediately rekindled, but then finds out that her crush isn’t having such a good life as she thought he was having. He is in a wheel chair.

And from that moment the manga truly begins as Tsugumi wonders about if a relationship with a wheelchair-bound guy would work. Can you be with someone who can’t do everything you can? Can you handle the care, the worries, the fact he can get sick at any moment, even die in a few years? It is a very loaded subject, and we see how Tsugumi tries to find an answer while falling deeper and deeper in love with Itsuki. She tries to help him out whenever she can, she is there for him when he is in the hospital a few times, she tries to show him that she really cares, that she really wants him as he is. That she knows that it may not last long, that it won’t be easy, but that she just loves him.

Of course it isn’t an easy road. Itsuki is not doing well, despite just continuing with everything. While I was impressed that he never gave up and I could also understand that he wanted to continue as he is getting great chances at the firm… at times I wanted to shake him a bit to tell him that it is OK to take a break at times, you don’t need to go until your body collapses, until everything shuts down.

Haruto’s story was heartbreaking. The poor guy, I hope that with what Itsuki has done for him, showed him, that he can pave a new road to something awesome. Plus I hope he can accept his girlfriend again, she has waited for him. She has been visiting for a year now, waiting, waiting. I think you don’t need to be worried she may run away from you (like Itsuki’s girlfriend in college did after the accident).

I am also happy, well if you want to call it that, that we not only see Tsugumi’s perspective, but also Itsuki’s. We see him not being able to sleep due to the pain in his legs (phantom limb), we see him hurting. But we also see him fall in love with Tsugumi.

The ending was just perfection, I am so happy for both of them, and I hope that their romance will continue for a long time to come. Though… given several things, and I have read enough other manga, I fear that we may be going for a bad ending. I already cried tons while reading, I am not sure if I can handle a bad ending should one appear in the next volumes.

We also see how people react to a guy in a wheelchair and I frankly wanted to shake up some people. 😐

The art is pretty decent, at times I felt the style didn’t exactly fit with the story and the heaviness of it all.

All in all, I want to read more of series. Though again, I do hope for a good ending for Itsuki and Tsugumi.