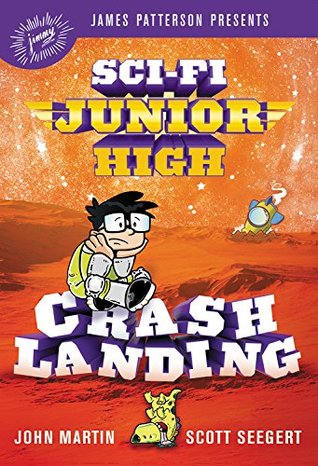 The second book in the Junior High series, and so much better than the first book.

This was mostly due to the fact I just knew there was going to be an annoying villain, so when his parts popped up I just tuned out. The words being read but not being processed. 😐 I had way more fun trying to see what the natives were saying than what the annoying piece of poop bunny was raving about. 😛

This time Kelvin is determined to make a new name for himself. Genius didn’t work out, so he wants to be known for something different. Throughout the book we see him, hilariously, try all sorts of things only to have them backfire quite spectacularly. Still I have to applaud that he is still trying and that is also trying out various new things. Like that silent chamber thing, I would love to try it out, though I probably won’t last much longer than Kelvin did.

I loved seeing several of the lessons and the field trip from Kelvin’s school. Boy, I would love to go to Kelvin’s school. Oh hold on, maybe not given the food. Eww. Then again maybe even space is a no-no if all the synthesised food tasted like eraser gums. Ewwwww.

There is tons of action, well at the end at least when our big evil annoying to hell bunny makes his appearance at the school dance. Sure, there is some action in the beginning/middle parts, but it is mostly tame and mostly considers of Kelvin and his friends trying to get rid of the Zorb. A thing that is very dangerous but it seems that adults in this book still don’t get that it is dangerous and should be removed.

Lightyear played another big role in this one, and I was happy to see the little guy again. I wouldn’t mind a dog who can duplicate stuff… though wait.. maybe I would prefer it to do it in an another way than puking/pooping it out. shivers

I had such a laugh when Bula turned out to be that. Wow, what a change from the previous book. Where she could barely string together words, was hyper as hell, and also a bit annoying. Now she was annoying in a different way. 😛 But I did like that the author went for this route. Now the question is will Kelvin ever get through that or will he forever be an average guy?

There was one part where Kelvin said something like: ‘How would you know, Zot? You’re not even in the class.’ Yet when we flip back to the pages from that class, who is there and present? Zot. She is sitting behind Dorn who made the remark about Kelvin being a Genius (aka not).

Pluspoints to how the story is told. Through conversations (with little drawn heads to indicate who is talking), comics, illustrations, and more.

So yeah, I am hoping that we will have more books in this series. Though again, less of the annoying villain, or maybe just a new better villain if there is such a big need for a villain.