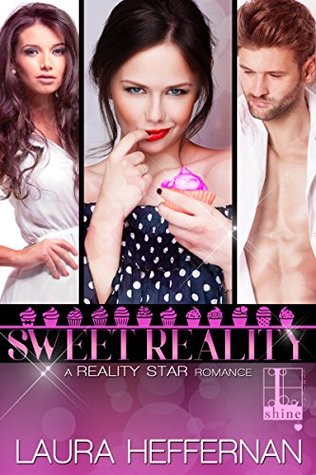 The drama and tension continues in Sweet Reality. This time no fishbowls, it is time for a cruise!

So I just had to continue reading this series. The first one had left in need for more. And how can I resist more drama and romance? Plus this time on a cruise ship. Ah, one day I hope that I can also go on a cruise ship, until then books (with very nice descriptions of everything) will have to do.

I have to say that I liked this one less than the previous book. Because of the drama. It was just too much, too stupid, too silly. I will write about why and how in a bit.

First up, I was happy that we get to see Jen and Justin again. Happy that we also get a recap on what happened in the time when we last saw them until now. As it has been sometime since The Fishbowl (and that amazing first kiss) ended. I am quite glad that the author didn’t decide to give us those years between, while they do sound happy and fun, I don’t think I could read chapters upon chapters about them settling down and getting stuff done. 😛

The cruise is something that The Network has set up. Justin and Jen think that they can finally have some relaxation, some sweet moments, and some well deserved together time. Sadly, they could have expected The Network’s cunning ways. The girls and boys are separated. Yep. And not only that, but Dominic’s wife (or should I say ex) and Dominic are also around. And of course Jen’s enemy… Ariana! You can imagine this already sets the tone for the book. We just know that there is going to be drama, and J & J also know this. Bye bye cruise of sweet romance, hello cruise of reality drama and poop hitting the fan.

Oh, and Jen is also working on getting the secret ingredient for Sarah’s bakery: Sweet Reality from another reality star: Tammy Rae. Throughout the book we see Jen try a lot of things to get Tammy Rae to spit out the secret recipe. I have to say I didn’t like Tammy Rae. Especially not later when poop hits the fan. Boy, that woman. Old and grumpy much?

The drama that just quite ruined the book, especially because of the stupidity. And really, how much are you trusting each other if this already causes you to almost break up?
For instance, one of the biggest dramas; Jen gets stuck with her ex (yes, they called in Dominic) during a trip ashore, all sorts of things happen, a certain event happens. There is a bad picture (though it only tells one side of the story and only shows a snapshot). When Jen comes back aboard she immediately goes to Justin to explain and diffuse the situation. Sadly, Jen in all her stupidity immediately does the same she doesn’t want her hubs to do when he is going to hear about her situation, as soon as she spots Ariana in her hubs room, hears him call her Ari, she assumes, flips, runs away. Yep. This girl. She doesn’t want her hubs to judge her and get the wrong image, but immediately assumes the worst when she spots her enemy in that room. rolls eyes Sadly, this wasn’t the only thing that was too drama for me. You would think, given that these two are together for at least 1 to 2 years that they would have trust. Yet throughout the book they show that trust is a word they both don’t seem to understand/know. 😐 Sorry, but I did see that they loved each other, that they cared about each other, but trust? I think they need a bit help on that front.

I was happy with the itineraries we got at each chapter + the gossip/confession parts.

Ariana was a bitch, but I guess we should all feel sorry for her? I am not sure I can. It just felt a bit too much for me. Too cliche.

Also for some reason the whole scene on the balcony near the end just had me in a big de ja vu moment. Like I already read the exact same scene, but I know I never read this book. Weird.

I was happy that Rachel and Ed were around. And Danielle also turned out to be quite the sweetheart at moments at least. I was happy with what she did in this book. Good job girl, that is really kind of you.

The proposal? Hey, sorry, but it isn’t a spoiler as we know from the first pages that Justin is about to propose to his girl. It was just so cute when he proposed. Though again, I do hope that they both can trust each other a bit more when they are married. And not go in a full divorce mode should something go wrong. Oh wait, I can see this happen. sighs

All in all, still a fun book, I had lots of fun reading it, just a shame of the drama. I get that this was a reality show cruise, but was it all needed? Especially given the image it gives us of Justin and Jen’s relationship.

Well, I can’t wait for the next book. Wedding time!