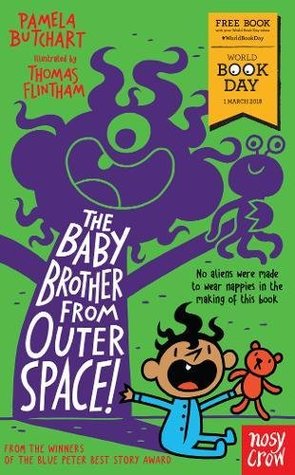 What would you do if you think your baby brother is an alien send from outer space?

This is one of the books for WBD 2018, one that I was hoping to add to my physical collection, but sadly neither Amazon nor Book depository had it in stock. sighsOh well.

I haven’t read any of the books in this series (yes, apparently there is a series with the characters from this book), but I am happy to say that one doesn’t need to have read the other books + it doesn’t spoil anything from the series. Though of course, I will be reading the other books as soon as I have a chance. If these kids have more adventures like this, I want to read them!

Back to this book. During one assembly one of the teachers has brought her newest kid, a tiny baby named Harim. All the teachers love the baby and immediately run towards it when the assembly is over, Our kids suspect something is very odd about the baby. Especially when even the lunch ladies are smiling! They team up with Haroon, the older brother of Harim. He also suspects something is going on with his brother, and he already has a theory, his brother is from OUTER SPACE! Yes, his brother must be an alien!

As an adult I quickly could see where this story would go, and of course I also understood the adults and why they acted the way they did. Still, I had tons of fun seeing our kids try to figure out if Harim is truly an alien or not. They try all sorts of things, even making glasses to stop the harmful alien rays of manipulation. 😛 And also I can imagine that the kids think that the baby is an alien. Those eyes. The stuff that happened when he was around.

I did think it was a bit odd for such a young baby to sit upright, eat chips, and other foods. Unless of course the kid is a bit older than he looks. For me he looks like to be a few weeks old going by the illustrations.

I also love the way the story was told, with bold and in capital letters. Some words were even more special and had stars around them.

Oh, and I would also have loved to have a secret lair when I was at primary school. Just a place to hide and relax for a bit.

The book is also illustrated, and I just realised it is done by Thomas Flintham! That explains why they seemed quite familiar and why I took an instant liking to them. I also have his Mazes and Puzzles books. So big plus points to the fun art!

So I really enjoyed this book and I would recommend it to everyone. You will giggle, you will gasp, and you will have a fabulous time.