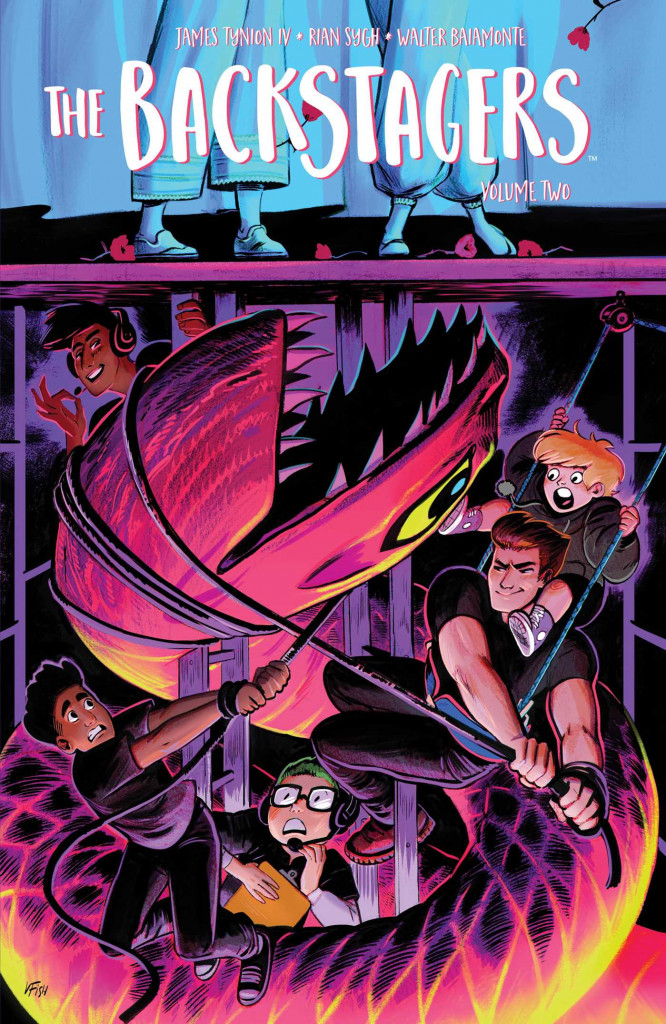 Ahhhhh, noooo it cannot end! Though it did end up perfectly, but no no no, I need more Backstagers!

Those are my reactions when I reached the ending of this book. I just love The Backstagers and this was one hell of an awesome volume, I just couldn’t put it down.

This time they meet another group of backstagers, though they aren’t an unknown group. So it was kind of fun to see the reunion and have one of our group of backstagers be happy to see those people again (though not too sure if they were all too happy at first to see him/his group). I just adored the place they met up, it was a giant room of costumes, if the dimension wasn’t so dangerous I wouldn’t have minded staying there for a while, dressing up in all sorts of fun outfits.

Plus it showed us that all the backstages everywhere are connected. Not only our school has an entrance, but it seemed that there is an entrance at every place, and that makes the place even more interesting. How big is it? What kind of possibilities and rooms are still to be found.

But it also showed that while time for our characters was x, actually time went by like y. Though I hadn’t expected it to be that much! Wow. I can imagine that people in the outside would be angry/worried. I would also be worried if my kid disappeared for such a long time.

And we have a new, very frightening, enemy hunting the magical realm behind the backstage. An enemy who isn’t afraid to get his hands dirty. Who will do anything to take his revenge. He definitely was terrifying, but when we find out certain things I also couldn’t help but feel sorry for the guy. So when the moment came for confrontation I was just crying as it must have hurt so much, not only for our enemy guy, but also for those who had connections to him.

We also have some romantic moments that made me awwwwwwwwww and squeeeeee!

Of course the art is still freaking awesome. I just adore the style and the colours used (especially the difference in colours/how bright they are when the group(s) enter the dimension).

All in all, highly recommended and I still hope for more, or a cute spinoff with our MC and his boyfriend going on dates/their romance.