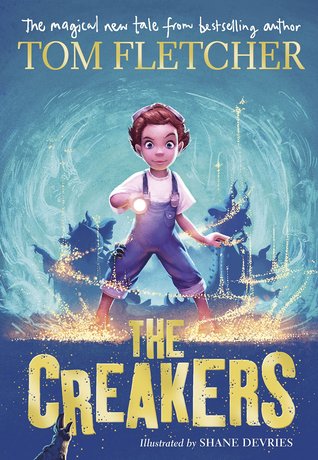 “What silently waits in the shadows at night? What’s under your bed, keeping just out of sight?”

Squee, this was just such a fun, exciting, delightful book!

The story starts off with a bang, our MC wakes up to find that her mom has disappeared! But she quickly finds out that it is not just her mom, it is all the adults in town! The kids are at first quite afraid and want their moms/dads/family members, but then they find a note (so obvious, but hey they are kids) and they get to celebrating their new freedom! No parents mean they can do whatever they want, whenever they want, and that they can make all their dreams come true (like the little kid who put sharks into the swimming pool, or the kids who decided that trampolines would be a good idea as transport). But sadly, they also find out that food is quickly depleting, and that the fun is not as fun the next day.

Lucy quickly takes a leader role, though she is not too happy about it. But she is the chosen one in this story. The one to figure out what to do. The one to get the adults back. I quite liked Lucy, she was strong and brave and smart, but also showed that she was worried, that she was afraid (which I would also be, you don’t know if the adults are safe and if you will ever see them back, not to mention the Creakers were pretty creepy). Yet, she doesn’t let that stand in her way. And thankfully she is also not alone in her quest, she has Norman (and oh yes, annoying Ella) who help her out, or at least try to help out.

Norman was a pretty OK character, yes, I found him slightly annoying with his constant scout stuff, but I still liked how he was, along with Lucy, one of the kids who didn’t go full crazy with all the freedom.

Ella? I just disliked her. I wouldn’t have minded if she had been taken by the monsters and never was returned. Bleh.

Woleb, or should we just call it Below, was a fun and interesting place. Sure, also disgusting as hell, but eh. 😛 I liked the way it worked, how it hid stuff and randomly made new place and hallways. I wasn’t surprised at where the adults resided that is a pretty fitting place, plus that way they won’t be able to resist much.

I have to say that I am kind of agreeing with The Creakers. Yes, they did things the wrong way and they were creepy/scary, but they had their reasons. If only that had found another way to communicate and let the humans know about that.

The twist at the end with who the King was, boy, I hadn’t seen that coming! Of course I could have suspected it, but I was so engrossed in the story that I missed the hints to it. Now that I look back (after reading) I can see there were hints to the identity of the King. I am definitely delighted with how the author managed to make the reveal fun and interesting.

Sure, I wasn’t happy with the mom. Really, you believe your hubby would just get up and leave? Without taking anything with him? Leaving his food/drink on the table? I would definitely have a bit more trust in my hubby if he would suddenly disappear without a hint.

The ending was great, I just loved what Lucy’s plan was! Everyone can be happy now. cheers

Plus points to the narrator and him butting in at times. I just adore a good narrator. <3

Then there are illustrations all over the book, and boy, the style is just wonderful and fun. I have to keep an eye on this illustrator, I want to see more of their work.

I could probably talk a bit longer about the book, but I think I mentioned all the important bits! I would recommend this book to all looking for a fun monster and garbage-filled book!