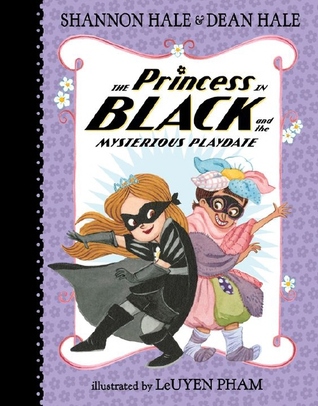 A new mysterious monster-defeating-princess appears, a playdate, dancing, and goats!

Well, it was still very fun, but I am not sure if I will continue with this series. I was already happy that (miraculously) one of my libraries had this book in their collection, because I just wasn’t up to buying it. But in the end I am just disappointed at this book.

Sure, it was also fun (at times), but the formula is just the same (monster appears, Princess in Black (with one and now two helpers) defeat it and done). Plus I am getting tired that NO ONE gets who the person is in the disguise. That kind of thing is fun once, but in book 5 with yet another avenger to the party? No. Come on, you can easily see who they are, not only because their disguises often just are terrible, but also with how they act. Not to mention the fact their normal/non-avenger sides are conveniently away and never show up at the same time as the superhero. Really? So much obvious hints.

Also, before anyone goes to talk about how this is a children’s book and that I am too old to read those. Sorry, but I read enough Children’s books + I quite liked most of this series.

I did like the monster in this one. How he could camouflage into objects or stuff and then try to take a nibble out of pets/animals. 😛 I loved that he followed the princess (because she smelled like goats) to her playdate and then went to create havoc there.

Also I loved the playdate between the girls. They are such good friends!

And of course the illustrations! I still adore those to bits. They are cute, sweet, but also kick-ass.

But yeah, all in all, I am not going to continue. I am stopping at this one so I at least leave with mostly good memories. 🙂