Happy Monday to all, and a warm welcome to the Meet me in the Strange Blog Tour! This is Leander Watts’ newest book about music, friendship, bands, and more.

For today’s post I got information on the author and the book, but I also got a fab excerpt and a fun giveaway.

So shall we meet in the strange? 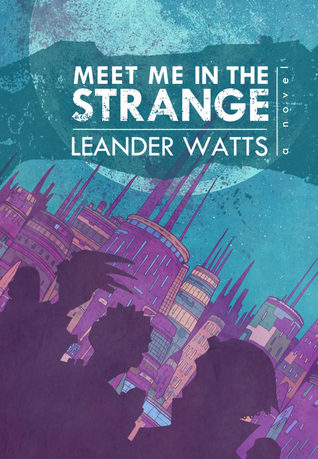 From the author of Beautiful City of the Dead and Stonecutter comes a dreamy, atmospheric coming of age story that will appeal to readers of all ages.

Davi tries to help a new friend, Anna Z, escape a cruel and controlling brother, and the teens end up running away to follow the tour of their rock idol, the otherworldly Django Conn. The story is set in a weird and wonderful retro-futuristic city of glam-girls and glister-boys and a strange phenomenon that Anna Z calls the “Alien Drift.” 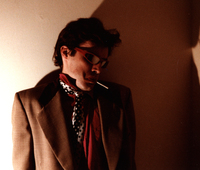 An avid musician, Leander Watts has played and sung for decades in a wide variety of bands. His interests range from garage rock to skronky jazz, from baroque organ to Appalachian gospel. The first rock concert he attended was David Bowie on the Diamond Dogs tour in 1974. He teaches writing and literature at the State University of New York at Geneseo (his alma mater). Leander Watts is the author of Stonecutter, Wild Ride to Heaven, Ten Thousand Charms, and Beautiful City of the Dead.

It was like she’d lost everything. Her name, her voice, any idea who she was or what she looked like, who the people were around her. The only thing that mattered was right there in front of her on the stage.

We were up close—masses of glam-girls and glister-boys all reaching out at the air like we could feel the music in our hands and pull it into ourselves. Wild kids pushing and pulsing with the music. Not really dancing. But it was music and bodies, so what else could you call it?

And it was the most amazing thing I’d ever seen because the girl was gone—not just freaked or blissed-out. She’d let go, totally, of everything.

I got that first glimpse of her about halfway through the show, and it was like I was split right down the middle of my skull. One half was still there with the rest of the crowd, the band like the Horses of Apollo carrying me upward with the fiery sound. And one half of me was zapped by seeing this girl, like a knife juiced with electricity cutting into my brain. She was gone, vanished, disappeared inside herself.

I was cranked up like all the other five thousand fan-kids who’d come to hear Django Conn, and see him and feel him. Some of them had dyed orange, cockatoo haircuts just like Django. Some—boys and girls—had eye makeup, silvery mascara, and big, shiny slashes of lipstick, dangly earrings and platform shoes, feathers and fishnets, and the whole glam look. But this girl was different.

She had glasses, ordinary eyeglasses. They were steamed over and caught the spotlights from the stage, oozy reds and liquid purples. Her hair was black, long and damp in snaky-sexy locks that clung to her face and her neck. And just for a second, I thought she looked like somebody who was shipwrecked, drowning in a sea, dying almost but okay with that, or more than okay, letting the waves sweep her up and away.

I don’t remember what she had on. Doesn’t matter. Was she pretty? Maybe. Beautiful? Doubtful. Amazing? Absolutely.

She wasn’t one of them, not exactly, trying to look like, trying to be Django. And neither was I, even though I’d been waiting months for this show, and I loved Man in the Moon in the Man more than just about anything in the world. I’d been listening to the new album nonstop for weeks, my new diamond needle wearing out the grooves.

For the song “She’s the Hype,” the lights went into a wild black and white strobe. Off and on and off and on, pulsing, slamming, stuttering. And the girl kept appearing and disappearing. Not like a ghost all wispy and see-through. In flashes, for a second or two, she was solid, real, realer than anything. It was like the light itself was a drum, pounding light hitting the crowd in sudden bursts. I got a glimpse, and then she was gone. Then back again, broken up into frames like an old film, flickering in and out of reality.

Nobody was paying attention to other people. Nobody but me. All eyes were on Django, and all ears were blasted by the band. So when the girl lost it, when she totally lost it, I was the only one who saw and got it. Private, secret, just me and her alone, even though we were surrounded by five thousand others at the Maxima. Just me and her in that secret place.

The band got hotter, and the crowd got wilder. Django got fiercer, jumping into “I Asked for Water but She Gave me Gasoline.” And I lost sight of the girl, like the tidal waves pushed us apart, a couple of pieces of broken driftwood in a blackwater storm.

Django did all my faves: “I Fear No Venom,” “Girls Will Be Boys,” “Empire of Light,” “Pavlov’s Daughters.” They finished up with “Flash Bang Baby.” And then Django vanished in a sudden cloud, like a puff ball when it bursts and shoots that cloud of dust-spores into the air. It was like he blew up right there in front of five thousand fans. One second he was singing the last line from the last song on Man in the Moon in the Man, over and over again: “You’re all I’ve ever had!” Then the band crashed to the end of the song, and it looked as if he’d exploded. It was just a stage trick of course, lights and smoke like a magician uses to cover up his best illusion. But Django blew up and the dust spores whooshed out over us, a cloud of powder pink and velvety violet, and that was the end of the show.