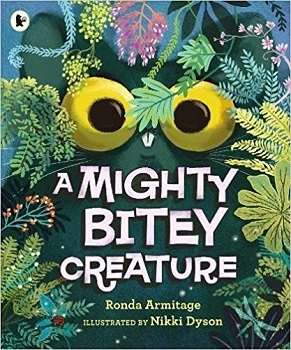 Something is biting animals in the jungle, what is this vile beast doing these things?

So I was definitely looking forward to this book, it just seemed so cute, so adorable, plus i just needed to know what kind of creature would be biting other animals in their bums. 😛

Sadly though, the stupidity of the creatures was just too much. Instead of just checking what bit them in their bums, they run in chaos to their King (poor dude, he must get so tired of his idiot underlings coming to bother him at any moment of the day). I know that they are scared, but really, if you see what is the actual culprit I can’t imagine that this would a) hurt someone that badly b) make such a big impression. For most of the book I actually thought the whole creature would be a mosquito Now that would have been funny to see (though also a bit absurd).

I think it also didn’t help that the book was just repetition all the time. We meet x animal, he gets bitten, runs away to the King, comes across a creature, said creatures gets bitten, runs with the first animal, and so on. I thought the King would be a bit different, but no.

Giving this book 1.5 stars is only because of the art (well, not the art of King Lion, but the rest was pretty nicely done, especially those two spreads at the beginning and the end).

But yeah, no recommendation for me on this book.