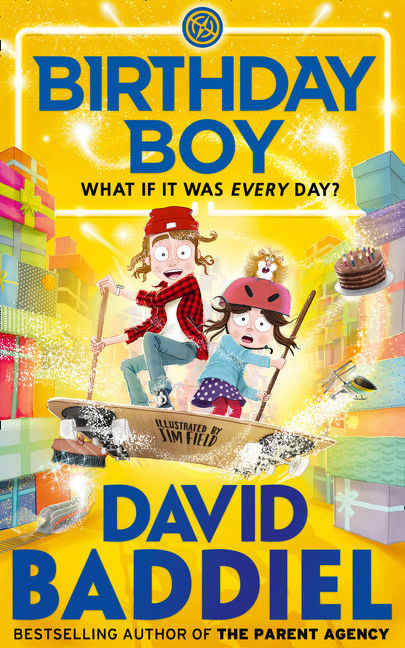 Isn’t it a wish of all of us when we are kids, to have a birthday that lasts forever? I know I for sure wouldn’t have wished for it when I was a kid. 😛 So I just had to read this book, not only because David Baddiel wrote it and he writes all the awesome stuff, but also because of the birthday. I just wanted to see what would happen, would everlasting birthdays be fun? Would we only see the bright side of it all? Or would we see the consequences and the dark side of it all? I can now tell you that this book will give you an insight in all of it. And not only how it is for the one who did the wish, but also his family, friends, school, everyone. Plus, added to the wishing and birthday mix is also a story about family, grandparents, and dementia.

It is Sam’s birthday, and he has a fabulous day filled with friends, food, presents, and more. But he doesn’t want it to stop, so while watching through his telescope just before midnight and spotting a shooting star, he makes a wish. Something he never thought come true, but the next day he has another birthday, and the next another one, and so on and on. At first we see Sam thinking it all very awesome and fun and he is making full use of it. He is having fun with all his new toys. But…. you can imagine how it will go.

As I said, the book doesn’t just focus on the goods of having a birthday that never stops, it features the bads as well. Like how Ruby feels a bit neglected at times, how Sam’s parents struggle to get presents for Sam as money is quickly depleting, how their family is falling farther apart with each birthday, but we also see it is affecting Sam. He went from a fun, sweet, crazy about birthdays, boy to a chubby demanding boy who is quite grumpy if he doesn’t get what he wants. Thankfully, and I am really really thankful for it, this Sam is around for only a small bit. Something happens that triggers the return to old Sam. I was already worried that we would have to live with this Sam for a long time, and I am not sure if I would have liked the book so much then.

I love that the second part of the book (yes, it is split up in parts, be sure to check those illustrations) is all about various highlights in year Sam was celebrating his never ending birthday.

The ending or well, starting at the part where Sam gets to building secret stuff, and him and his sister doing the thing you see on the cover, was very exciting, and I have to say I really was rooting for Sam. For him to get rid of the wish, for him to find his grandfather (who is missing). In the meantime I was also laughing and trying to not roll off my chair because of what happened in the parts where the parents/police officers were featured. Those police officers were just so silly, how did they ever get to be in the police force. 😛

On the one side I am a bit sad that we will never find out what happened to the star, or if it was really the star that fell down that triggered and fulfilled the wish, or if it was just something else. Or maybe I just missed something small that I overlooked in all the drama (and also comedy) that happened near/at the end.

I was at first worried about the sister, since she was so smart and at times a bit annoying, I was thinking she would be obnoxious, but she is definitely one of my favourite characters in this book.

While I like the addition of Zada (she was quite the awesome character)… It also just feels like she was added in the book because the refugee situation is quite a hot topic. I know this may sound mean, and I can guarantee it isn’t like that, I am just not too sure how I should word it differently. I just see more and more authors put them in their new books, and I wonder if they are doing it because they want to or if they have to.

There was a fair share of fourth wall breaking that had me in stitches.

I knew what was up with Sam’s grandfather Sam from quite early in the book. I recognised the signs immediately, especially when he started to run away from the home. I am glad that he at least has so much support of his family, and I hope that they can all help him as much as they can.

And of course the book is illustrated again by Jim Field. His art just fits too perfectly with David Baddiel’s books, so I hope that he will be the illustrator for many more books to follow.

Ah, and I am delighted to let my Dutch readers know that a Dutch translation for this book is in the works. 🙂

So I will be ending this review with that I would recommend this book to everyone. And I can’t wait to see what David Baddiel will be writing about next!