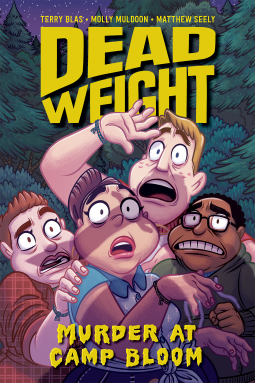 OMG, OMG, OMG, this was even better than I had hoped/dreamed it would be. I had heard about this one through twitter earlier, and I was already hyped. And then I spotted it on Netgalley.

Meet Jesse, Noah, Tony, and Kate. 4 teenagers stuck in fat camp. Yep, fat camp. But this year will be a whole lot more than losing weight, there is a murderer walking around, what is their plan, who is going to die next? These kids are going to solve it and find out who the murderer is!

I just love how the story was written. How directly from the start I had the feeling something was up. There are all sorts of hints thrown around even before the murder actually happens! I just adore that, sometimes books just go happy go lucky and then BOOM, murder. But now it was even more exciting as I was already trying to figure out the whodunnit from the start. 😛

The four characters? I have to say Jesse was my absolute favourite (fashion girl, plus I just had a laugh how she had both her phone and candy hidden), followed by Noah (so shy and cute), Kate (what is up with this girl, she is hiding something and I love her strong attitude), Tony (addicted to the net + I just adore how hard he is trying to lose weight). I loved how these 4 got together and became very close very fast. How, even though they were scared as hell, they still went on to solve the mystery and who is doing all these things, and why!

I also liked that we find out more about the background of these characters. We find out something about each character, about how they got to be at the camp, how they got fat and how they feel about it.

Plus there is something else happening between two characters that just made me squeal in happiness.

The murders? The whodunnit? The mystery of why and how? It was terrific, and I did have some suspects, but in the end it wasn’t until x scene that I knew who it should be, who the murderer was. So when another scene happened I was pretty much whispershouting (due to me being sick/throat hurting/lung infection) for our group to tackle that person and not fall for their tricks! Though I hadn’t expected it to be because of that reason (or well, I hadn’t expected those people to do x and y (and given the reaction of everyone, they also didn’t expect it)). I could kind of understand the reasoning of the murder, it must have hurt that person a lot to find that out. 🙁 Then again, that doesn’t make murder OK to do. Murder is never OK. But I can imagine why that person spiralled out of control.

As you can see I am dodging expertly around all the topics, I just don’t want to spoil anything, I want people to go into this one fresh without much information about everything. This book is just too awesome and I want people to experience the same feelings I had while I was reading.

The art is just perfect! I just adore how the artist(s) drew the characters, who, instead of so many other comics, don’t look at all alike in their weight problems. You have chubby, fat, very much overweight, and everything in between. Plus I just love the designs of the characters, it fits so well with their personalities. And I love seeing the camp and the surrounding area.

The ending was both sad but also a happy one, and it also had me laughing when we found out that about Kate. 😛

All in all, I could rave for a bit longer about this one, probably for hours. 😛 But I will just keep it at this and will recommend this book to everyone. Read this!