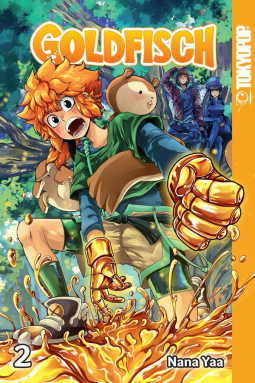 yawns That is mostly my reaction while reading this manga-styled comic. I was really looking forward to it as I quite liked the first volume. But sadly, I noticed quite early on that I was continually checking how far I was, I was yawning, and I was doing ten other things instead of reading.

The battle at the beginning, aka the cliffhanger from the previous time, that part was pretty dang exciting to watch. To see that our group of friends is getting better with their skills and powers. Though they have still a lot to learn if they want to win and not caught/almost die.

We also get backstory on Morrey and how he lost his dad, and how he found his twin brother. I had thought they had been together forever, but apparently they didn’t met until an event caused Morrey away from his home. Plus we found out a bit more about the mayor and his life and how he found that Midas potion.

I was happy that Morrey can now do more with his hands. Thanks to Shelly. That is really sweet of her to make something this awesome. I am sure Morrey’s life will get a bit easier now.

I really didn’t like how Morrey touched Shelly’s boobs when he had the chance to do so thanks to the gloves. Really man? The first thing you do when you have the option to hold things without goldifying them and you go for your friend’s boobs? Classy. Very classy. Really, this happens enough in manga, no need to also add it in manga-styled comics. 😐

The dialogues at times also got too much. I just wanted them to shut up and get to doing instead of talking talking and talking.

The art? Hit and miss in this one. At times it looked quite pretty and I saw improvement. But other times… Especially the hands were weird at times. Sometimes they were tiny, then normal-sized, then giant-sized.

And of course, yay, another effing cliffhanger. groans Really? Was that necessary. sighs

So yeah, not happy, and I am not going to continue this series.