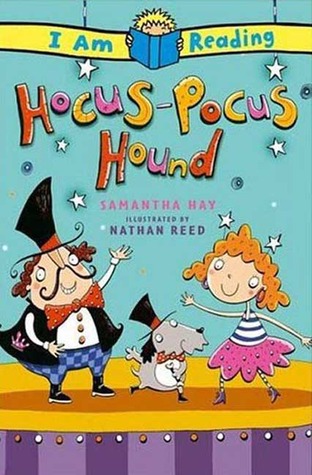 A silly, but oh so funny short book about a magician’s assistant, a magical hound, and an annoying magician.

I have to say that I at first picked this book because of the illustrations. I just adore Nathan Reed’s art and I was happy to see him featured in this book. And after checking out the blurb? Well, I just had to read it.

This was such a fun book, though I have to say the magician guy is just annoying and eh. He didn’t seem to care about anyone but himself. And yes, Doris was a bit of a klutz, but she still worked hard, tried her best, and did a whole lot of other things. I was pretty pissed at what the magician did. How he just replaced her with a dog. But I am happy with what happened to the magician at the end. He definitely deserved that, and he has learned quite a lesson from this (or well, I hope).

Doris was just the sweetest. Especially that she didn’t resent that the dog took her place, instead she starts taking care for him, getting him nommie foods. Plus at the ending? She could have picked a whole different route, but decided to be kind and forgiving.

Well, you know that I adore the art. 🙂 Nathan Reed did a great job.

All in all, a very short book, but definitely worth reading! Recommended.