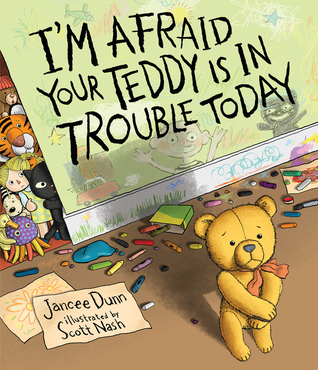 This book seemed really fun, but it actually wasn’t.

So I was quite curious about this book, I had a few ideas of how the story would go, but sadly, not only did none of them happen, but the book just wasn’t good either. Do any of you remember Ted? The movie about that annoying bear that is alive and pulling shit? Well, this is what you get if you make a picture book about that shitty movie.

At first it was quite funny, but then I just started shaking my head. Why in heaven’s name would the police act like this towards a child? I get that this is his toy, but he is a minor as well. Then there is the whole neighbours complaining part, at 2.15pm in the afternoon. I get it when one person doesn’t work or works from home in a street, but 4 of them?

What I had actually hoped that this book would do was make it turn out that it was all an imaginary game played by various kids. Instead this book features a reality where your TEDDY and all your other PLUSHIES are fucking alive. Yep. If that doesn’t creep anyone out, I don’t know what will.

And it just took the whole party thing way too far. I got the hint that it was a giant party after 4 pages, I don’t need 30 more pages. 😐

The ending…. eh. It just added to the absurdness and stupidity of this whole book.

The art also wasn’t the best.

Also thank you Courtney (a friend of mine on Goodreads) for saying this to me, so now I cannot unsee it any more: “The Teddy on the cover looks like his arm came off and he’s holding it in his other paw =(”