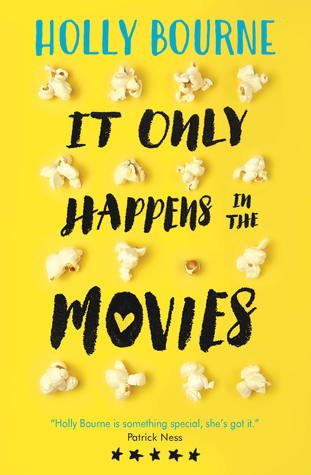 Rating this one 4.5 stars, because I loved it… but also hated it. Or I should say I hated Audrey for a lot of the book.

This will be a very chaotic review as my love and hate is very much warring with each other. I will be ranting, and raving, my good and bad points will go all together in one mix.

This book also showed me why I am reading less and less YA these days, and am dropping oh so many of them, more than I ever did back when I really went and found out about YA and focussed on it. Because these days YA features girls like Audrey. Girls who think that instead of talking (haha, at how she was all like in movies they don’t talk when they have an obstacle (see page 375), well gee wiz, you also don’t talk) men should just magically understand them. Talking is overrated, instead girls will just shout and scream and throw a very silly fit when a man dares to say things like that one isn’t like other girls (still don’t get why that is so terrible). There is quite a bit of man hating which I don’t get. I get that Audrey had bad experiences with 2 men. Namely her dad and the divorce and how that broke her mum, and how Milo was. But does that mean that all men must be distrusted and treated like they are all the same? All the same shit? I am getting tired of the hating on men. And I am a girl myself, and yes I had quite a few shitty experiences regarding men, but does that mean I hate men? HAHHAHHAHA, no. Sorry, just like with many things there are just bad apples in the mix.

I also didn’t like how Audrey switched between eh men, and OMG I want him to touch me and flirt with me. And how she was slightly offended when Harry stopped flirting with her in the beginning. Gee wiz girl, I would also have stopped flirting if you acted like such a bitch over something silly. You need to make up your mind girl, and make it up fast.
Also I loved that she said she just said to him to stop flirting. Actually girl, that is a lie, and you know it. You fucking burned the poor lad to the ground.

I did love seeing her get better as the book progressed. How she truly saw that all she wanted in live was Drama, how she wanted to be an actress. How she missed it. How she found herself stupid for ending it due to Milo. How she also saw that what happened to her mum isn’t just her responsibility. She shouldn’t feel guilty because she has a life. She shouldn’t feel bad because she wants to be out of the house.

I am not too sure about Dougie, in the beginning parts I just didn’t like him. How he kept shoving everything on Audrey. How he guilttripped her oh so many times. After the complete meltdown it seemed that he was seeing something else, and I was wondering why the hell it took him so long. He knew his mum was like this. But he expects his younger sister to just do everything? SO yeah, mixed bag on this dude.

I loved Audrey’s friends (the girls), I loved them so much. Even with how Audrey was during those months, they understood and they stuck to her, hoping she would be Audrey again. Would confide in them again. Would come to them. I just adore that, I was definitely worried that they were giving up on her. I loved how fun they were, how happy, and how caring.

Leroy was also a fun character, I loved how he was so dramatic, so much fun, always hyped about everything. I loved that he did gaming and that even posted videos. I loved how supportive he was about Audrey (though his lack of attention sometimes was a bit eh). Bonus points to him picking a m/m kiss for the survey.

The divorce and what it did to the mum? Gosh, I disliked the dad so much. I get that he probably fell in love with someone else, but gosh, is it so hard to be honest? To tell your wife you found someone else? Instead you cheat on her and then leave her. Then you just totally forget her. As Audrey said, like they were an old pair of trainers. Just throw them out when you have new ones. I was hurting so much for the mum, and I was hoping she would just find someone, help, who could help her out. As she wasn’t doing fine. We clearly see her spiral in and out. One moment she is feeling fine-ish, the next she is drunk, crying, sniffling, breaking down.

I did like Harry x Audrey, even if I found their relationship slightly toxic. Then again, I think that is mostly how it was written/how Audrey acted than it may have actually been. I am not too happy about him being so intoxicated all the time. Not only with drugs, but also with smoking and drinking. You know that Audrey doesn’t like it when you are completely wasted, yet you keep going for it? which reminds me of an ex of mine who didn’t give a rat’s ass about smoking near me even when I told him no, mmmm
But still, I loved them together, during the zombie movie parts, when they worked together, during the time they got closer, I loved seeing that. I loved Audrey opening up to Harry, trusting him more and more with all sorts of things. They sure made a cute couple.

Rosie was just the worst character in the entire book. I disliked her from the start. I never trusted that girl. I don’t get why Harry didn’t see it. Why Harry kept defending her. Why he didn’t think a bit. Why he didn’t tell her to back off.

What happened after the wrap-up party and the zombie run? Good grief, I was laughing so hard at that, especially given the thing she talked about in her essay on page 375. Giirrrrrrrrrrlllll, you dare to post that and then not give a flipping fuck that you do the same as those cheesy romance movies? That you are now doing the same as all those movies you seemingly hate (though I think you still like them in a way). Yes, what he did was wrong, and I would have also been seriously pissed to beyond, but come on guys, talk about it, and not in the midst of a fucking zombie run, but when you are both done with this. Though I have to say I was in stitches to what happening in the clearing because of how Audrey got away, while Harry… well. 😛

The ending had me in tears. That was just the sweetest to do, that was just the best. And I loved every bit of it, every every bit. I loved that he put all the cliche stuff from movies in this, that he did that for Audrey. That surely is a grand gesture. But I am glad that it ended the way it did. I am happy what Audrey picked. It mustn’t have been easy, but she choose that. She could have chosen so many endings, and she picked that one. And while it hurt, it was the best one. Though of course, cheesy as I am, I would still hope that after some time, after some thinking, they will still pick another ending.

I liked that this book felt oh so much like a romance movie, just more serious, less cheese.

Oh and I would have liked to know about her media project went. Did she get that A she deserves? What did the teacher think? How did the rest of her subjects go, since she was doing pretty terrible.

Also, ADHD doesn’t just disappear. You can’t just have it during childhood and have it magically disappear. It can get less with diet and medicine or help/therapy to learn how to handle it, but it will not just leave you as you grow older. sighs

Ah, and quoting a tweet (I had oh so much fun tweeting about this book): “You know that something is wrong if one of your friends makes a remark about picking a girl kissing a boy, and then saying: “See, Audrey, I can be a feminist sometimes.” And then she looks up at Audrey all nervous like Audrey will eat her or burn her to the fucking ground.” Just to clarify, Audrey was looking for answers to a survey about movies and kisses. One of the girls said she picked a kiss that features a girl taking action, and then she says that. Sorry, but that just doesn’t sound healthy to me. That you are nervous. That you may worry your friend will flip her lid.

Extra points to the cover and the inside of the book!

All in all, a book that I loved and I hated. Yep. Conflicted much. I loved it, I sped through it, I couldn’t stop reading. But also a book that made me rage, that made me go to twitter and spew all the rage (or at least bits of it). A book that makes me wonder why I at times still read YA. But also a book that made me laugh, enjoy the romance, I loved that these characters worked in a cinema which was so much fun as it wasn’t just boring stuff, but all the stuff that happens in a cinema and more. All, I am not sure if I would recommend it or not. On the one hand yes, but then there is the rage, and I am not sure any more. Pick for yourself, and I am so sorry for the too long review. 😛

as I still can’t make up my fucking mind. 😛