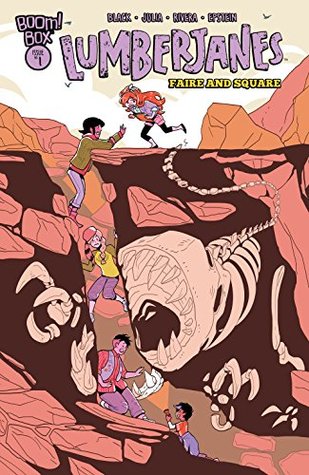 My last special, and this one has Robin Hood, dragons/pterodactyls, telenovelas (in other words another supershort about Ripley).

Another two in one special: Faire and Square and Las Estrellas Del Campo: Edición Lumberjanes. Again, like with the other one that had two short stories (one bigger one and the other very short), I liked the first story the most, and the last story the least. The last story especially was very eh to get through, I like Ripley and I could understood she missed her family, the telenovelas, but it was just eh. Maybe also because I haven’t watched any telenovelas and have no interest in them if I should ever come across them.

The first story is about our girls finding a book about Robin Hood, and that leads to a magical flyer (I would call it that) to the Nottingham Medieval Faire. The girls decide to find the mysterious Rowena (the owner of the book) and so they set off. I had quite a lot of fun seeing them find the faire and then magically stumbling on it. And so the fun really begins! The faire, oh boy, I just wanted to go there and try on all the dresses, all the food, and also shoot some arrows at targets (though I would be terrible and probably shoot something else instead :P).

Rowena was just the cutest, I loved her enthusiasm, her peppy power. She was just the best. I loved her during the archery stuff (hey, not a spoiler, come on everyone can see it), I loved it when she connected with Molly. They really make quite a pair, and I hope that they will be able to meet up again.

But like all the Lumberjanes, there is a hint of mystery, some form of supernatural. And this time it is a pterodactyl named Birdy (yep, that its name). Who started out pretty cute, but then became way too huge for the faire, for Rowena. Thanks to this though I guess one mystery is solved, how all those mysterious and supernatural and weird creatures get into the forest where the Lumberjanes stay. Portals. It is said by one of the girls that they have accidentally opened one, no clue how, but I guess this is more motivation for me to read the series again. To give it another go.

I loved the ending, and while it was bit sad, as goodbyes have to be said, but it was also a happy one as yay for Birdy, and the faire will come back again next summer so everyone can reconnect again.

Well, I have said what I wanted to say about the second story, and I am not going to go into it further.

The art? Not entirely my favourite, in neither of the stories. There were some cute parts, but mostly it was just not for me.

But all in all, these specials definitely sparked my interest in getting to reading the Lumberjanes series again. I am in the mood for some good supernatural summer camp adventures. 🙂