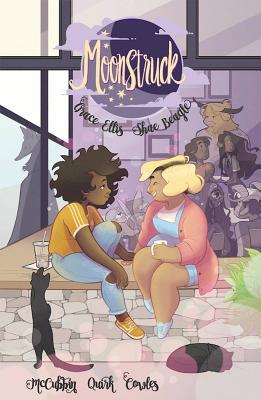 Werewolves, sweet cute romance, a hilarious centaur friend, magicians, drama, and more! This book will pull you in and not spit you out until the end.

So I have been meaning to read this book for ages, the cover was what pulled me in. These girls looked adorable and cute together and I wanted to see them get together/go on dates/etc.

But this book is so much more than just cute dates and cute romance. There is some drama and tension when an evil magician steals Chet’s magic (aka his centaurness) and he returns to a normal human. It is up to our characters to get the magic back, unmask the fiend that did it, and fix the problems. But between that we also see two girls getting closer together, and Chet going from worrying and feeling depressed to also wondering if the hot Minotaur guy still would like him.

While I did love Julie, I did think, and sorry if this is rude, that she was a bit too oversensitive. The littlest mention of something dog-related and she raised her shackles or acted like the world was ending. I am sorry, maybe if we had a bit more of a backstory on why she is acting like this, I may have understood it a bit more, but now I just found it a bit silly. OMG someone calls me a puppy, oh no, I must immediately humpfh and leave this building. Girrrrllll….
But I did love her, and I could understand that it wasn’t always easy for her to be a werewolf. Especially when one just changes without warning when emotions rise. So I was delighted that she had found a fellow werewolf girl who loves/likes her and was there for her when she needed a cuddle or a hug.
I did also like that she was a barista (albeit a bit clumsy).

Pluspoints go to Cass for being totally epic and fun. I loved her going in prophecy/vision mode and it was always interesting to hear her prophecies.

I also love the rest of the cast (well the good guys at least), they are so diverse and fun.

Oh and it was quite interesting that this isn’t a world with just supernatural creatures, but that there are also humans. I would like to see more of how this world works. Are there more humans? How is the relationship between supernatural and humans?

The reason why I am not rating this book a full 5 stars, or even more is due to two points that I didn’t like. One the magician and how that was handled. There was such a build-up, so much planning, so much research, and some smaller battles, but then it ends in a very anti-climax and easy/lazy way. Not a bang, but more like a fizz and problem solved.
Then there were those Pleasant Mountain Sisters that were just so boring that I eventually was dreading it when they came around. It definitely didn’t help that the style didn’t fit the main comic at all.

The art (well the main comic one) is soft, adorable, and pretty. I just adore the way the artist drew the characters.

I hope that there are going to be more volumes in this series, I need to see more Julie and Selena, and of course the ever fun Chet. 🙂