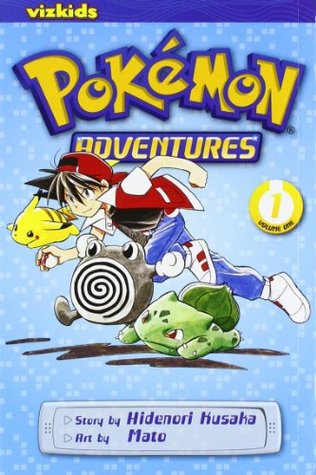 “I wanna be the very best. Like no one ever was. To catch them is my real test.”

I just adore Pokemon, and not just me, my boyfriend as well.I just love that VIZ has brought out these in box sets, I got the first one now (gave it to my boyfriend for Christmas), and I am planning on buying another boxset soon.

This was just so nostalgic to read. The starter pokemon, pikachu, St. Anne, Misty, and so many other events, I was just delighted to see them, and more, pass by. It reminded me of playing the games and watching the anime. Ah, such a delight.

Our main character is, duh, Red. he is a fun, boisterous kid with a big heart and a bit of an overdose of an ego. 😛 But he means it all well, even if he at times seems to make some very dodgy/hasty decisions (like just run into a tower filled with ghosts and monsters). I do love how he always cares about his pokemon. Training them in a way that is fun for them, plus also trying to befriend them. He doesn’t just seem them as a means to win battles or to be the very best, he also sees them as friends.
I also like his resourcefulness when doing battles. He always seems to be able to make the best of the situation and is very creative in using his pokemon’s moves.

Which is a total 180 from Blue. Blue is Red’s rival and he also wants to win, but his methods aren’t always the best (at least in my eyes). Sure, he cares about his pokemon, but the way he trains them… eh. Plus his ego attitude is also quite annoying. He seems to really think he is much much better than anyone. But in regards to being a rival… well he is the perfect rival for Red.

We also meet with Team Rocket, the villain in this manga. They are truly evil, and are trying all they can to get certain plans or pokemon. Nothing will stand in their way. Well… Red/Blue are there and are getting tangled in their plans. Red especially is very gung-ho on going against them.

The overlap between stories was a bit weird/messy. At times it seemed to go well, but more often than not it was jarring. Red would be at x point and in the next story would be at a totally different point. I would have rather seen him travel to those points instead of him being conveniently at the right points at the right time. 😛

And the translation was at times a bit weird, or at least it felt off.

The art is pretty decent, it fits very well, though the perspectives are not always right/correct. Red (and others) seem to go from tall to small (and not really as in chibi-style), when they run it looks like something is off. But the pokemon are super cute (especially Pikachu).

Oh, and be sure to check out the map and the progression parts at the back/after the story. It will show you where Red went, and also how he and his team are doing.