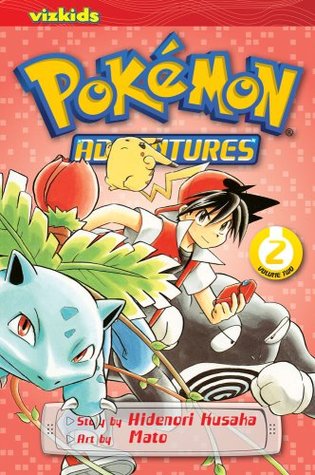 “To train them is my cause, I will travel across the land, Searching far and wide.”

The second volume this time with more excitement and Team Rocket! After loving the first volume (which wasn’t that big of a surprise) I just had to continue reading this series.

Red’s journey is continuing, this time with new encounters, more Team Rocket, new (well not new to me, but new to Red) places to visit, and much more. I do have to say that I was getting a bit tired of Team Rocket, I would rather see some more of Red’s adventures and him capturing more pokemon and befriending them.

As soon as we heard that Squirtle was stolen/got taken, I knew instantly who we would meet. And indeed, it is the girl that Red already encountered before (and who swindled him of 6000 pocket money). Her name is, how could it not be, Green. Yep. I have to say that I didn’t like the girl AT ALL. She was rude, she didn’t get the hint, she kept getting into trouble, she stole everything left and right, and several other things. Sure, it seems she has her good side as well, but still I didn’t like that she was around so much.

The Safari Zone? I did think it was terrible rude of Red what he did there. Sorry, but you clearly are told NO, and yet you do all that crap? Should I feel sorry for you now? Because I am not. I was mostly just cheering on the pokemon. Yes, eat him! Yes, get to him! But of course, you can guess how it all ends. I do have to say I had a laugh at the ending, especially the looks of those guys from the Safari Zone, they probably hadn’t expected THAT to happen. And poor Pikachu, all worried about his owner. Pikachu, you don’t need to worry. This is Red we are talking about, he has the magical protagonist magic protecting him.

We also meet Mew and MewTwo (or well that one is still under construction). And there are also other big pokemon we are meeting. Like Moltres, Articuno. I was definitely happy to see those guys again, they are just so pretty and nice. Just a shame that Team Rocket is hunting them. Poor things.

Red also makes new friends along the way, new pokemon, and of course has gym battles, because he still wants to be the very best there is. And he also needs to find a new machine, Surf because he needs to be able to go an island that is only reached by surf (or one can just swim, but good luck then).

We also meet with Giovanni. shiversThe dude is just as creepy as he always is. I hope Red will be ready when he has to battle Giovanni, it sure will be a tough battle.

I had a big laugh when Blue and Red bumped into each other and their pokeballs got mixed up. I loved how Red tried to find his pokemon and also tried to befriend Blue’s pokemon. On the other hand we have Blue who doesn’t give a dip about friendship or finding his pokemon and just trains Red’s pokemon while waiting for Red.

The cliffhanger at the end? Oh boy, even more reason for me to just continue reading. I want to know how Red and Blue will team up to get things fixed.

The translation was pretty decent, but it felt very Americanised at points. Which is a bit of a shame.

The art was still pretty great, only the perspectives and how the characters looked (tall/short/etc.) was a bit wobbly. The pokemon are still very cute and pretty, I love how the artist drew the legendaries.

All in all, I would recommend this volume as well. It was definitely fun to read.