“Each Pokemon to understand, The power that’s inside!” 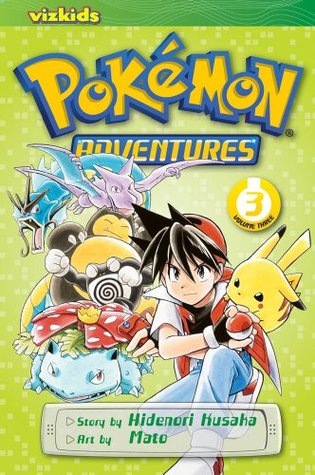 The third volume and the end of the first part in Red’s journey! Yep, this volume will conclude and tie up several things together.

First up is Red and Blue’s battle to get back Palette Town’s inhabitants and Dr. Oak. But they are not alone, Green is there as well (for her own reasons). Yep, all three of our colour-named characters are here. It is non-stop action as these three have to band together and set aside their differences to make up a team. Only then they can defeat or have a chance at defeating Team Rocket and save people. It was quite fun to see them band together, though I have to say I am still not a fan of Green. Especially after the stunt she pulls in this one. During a vital moment. Sorry, there is a time for things, and this was definitely not the time. But hey, at least Red isn’t me, because I am not sure if, after all the crap she pulled, I would have saved her. I know this sounds mean, but come on, this girl is just too annoying, too urgh.
The battles were fun to watch, I definitely was rooting for Red and Blue to defeat the big baddies. They had quite a few nice tricks up their sleeves.
And I was delighted to not only see Red/Blue/Green team up, but also several other people that they met on their journey are getting together to help out!

And no, I won’t tell you how it ends, though I guess given there are still tons of volumes out, you can probably do a good bet. 😛

Next up is the MewTwo situation. Another something that needs to be concluded, well, for now. I have to say it was pretty interesting, but I found it all a bit too simply solved. It also made it seem like MewTwo is not that strong, while he is supposedly very destructive and dangerous (and we see clear evidence of that).

The action doesn’t stop in the next story, oh no. Red immediately has to help out a little girl who wishes to be a trainer (which I found really adorable and sweet, go Red, go teach her how to care for a Pokemon and how to catch one), and then proceeds to check out Viridian City Gym. Where he meets an acquaintance, namely Giovanni. I had a bit of a laugh at the statue and the name plate that Red encounters. I am pretty sure it may have worked in Japanese, but now we only have NNI and that is located at the beginning of the sign, no way you can make Giovanni from that. Of course there is a battle and Red finally realises that Giovanni is in no way good. It also solves what is going on in the woods around the city (the one people were talking about it + also what we saw happening when Red met that girl).

And lastly is the most important event of all, The Pokemon League! Yep, it is time to finally decide who is the best trainer of all! Red, Blue, and of course, Green are all present. I did think it was a shame that we didn’t really get to see the first rounds, sure, it may have been a bit long to watch it all, but now it just felt a bit rushed. I guess I won’t have to tell you who is going to battle who. It is a classic, Red vs Blue. But before that fight there is another fight that will tell the (interesting) backstory of a character I dislike oh so much, Green. I did feel a bit sorry for what happened to her, but I did think she was still a whiny little insert bad words. Couldn’t you just have gone to Oak? Instead of stealing and now whining?
The final battle between Blue and Red was an intense one, even if I already knew the result (because come on, it is just so predictable), I just couldn’t stop watching. I was curious to see what these two were going to show. What tricks did they learn? How well do they know their pokemon and their moves? Are they able to make some great combos?

The art was still decent, though again perspective seems to be a difficult one, as is making sure the characters are the right proportions. But other than that, I did quite like it and the battles are well done. And how can I resist the cuteness and charm of the pokemon?

All in all, this was a great arc to read, and I am happy to have been part of it (again, though this time in manga form). I can’t wait to see what Red will get up to in the next volumes. I still got 4 volumes left, after that I guess I will have to get the next boxset if I want to read more (which yes, I do very much want).