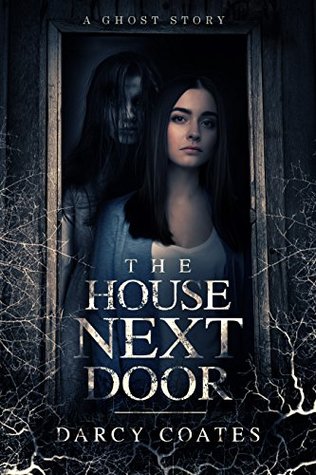 What will you do when you live next to a haunted house and someone new and seemingly kind moves in?

So, this is my second Darcy Coates book in two days, and my third in a week. 😛 Yep, I just adore Darcy Coates, she writes some amazing horror books.

The story was creepy, right from the beginning it was haunting. The family shooting and running away like mad? The feeling of an oppressive house that is finally sleeping once more. The arrival of Anna and all the things that happened when she moved in, and not even to mention the whole ending? Yeah, this book was a creepfest. And I am so delighted, especially after reading Carrow House which took ages to finally get a bit scary. I could use some good horror. And a very active haunted house is perfection. The ghost, Helen, was just terrifying as hell. Popping up at random places, playing her piano, appearing in mirrors/glass, and then later she became even more terrifying.

I loved to see Jo and Anna get friends, though at times it didn’t feel like they were friends. Mostly with how Anna acted (which may have to do with a certain ghost). At times it was quite awkward with Jo wanting to go say hi to Anna but she knew Anna wouldn’t want it. But in the end they are quite good friends, and it is thanks to Jo that x and y happen.

Jo’s cousin? Lukas? Eh, I am not too sure how I felt about him. He seemed very eh towards Jo (she even made remarks about it quite often), and then very friendly towards Anna. I get that he probably just had a weird way of showing his love, but still, I would have liked him to be a bit friendlier.

I do think it was a shame that nothing was done with the doll at Jo’s house. We do get some hints that there is something going on with it, like how it kept falling over. It would have been fun that part of the haunting was now in Jo’s house. And one could say it was just the house extending his claws into other parts of the street, but that doesn’t happen until much later in the book. Jo gets the doll soon after Anna’s arrival, and at that point the house is not that active yet.

Raul? What a terrible, terrible guy. I can imagine Anna having to flee away from him and find a safe haven. What she had to go through is terrible. And if one has to pick between a haunted building with a ghost (seemingly passive at the beginning) or an abusive boyfriend? I would also go for the ghost.


Then there was what happens afterwards which struck me weird until we get some explanation.

Also it would have been nice if we had known earlier why Jo never does a drop of work. Why she is seemingly always home with her 3 cats. It took up to almost the ending before we knew why she is just sitting at home doing nothing at all. Oh, bake, yes, but nothing else.

The ending? The revelation about our ghost? Ohhhhh boooooyyyy, I definitely didn’t see it coming and I was so surprised.

Mm, what more? Oh, of course, when they added cameras to the mix (and what happened during that time) but also when they got a medium. Those parts just had to me on the edge of my chair.

Big creepy plus points to the cover.

All in all, I could probably continue on for a bit about the book as it was really amazing and great and creepy and spooky, but I will keep it at this and close by saying that you all should read it. Now!