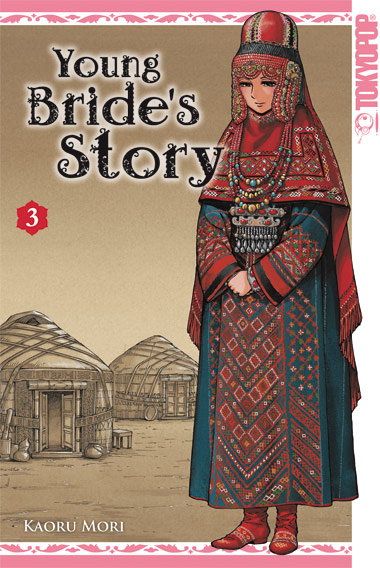 It is time for the journey of Mr. Smith to continue, but of course we also meet a new girl, there are several adventures and harrowing times, and we meet some old friends again.

In the last volume we said our goodbyes to Amira and Karluk. It was time for Mr. Smith to travel again to find his companion/guide. It wasn’t that safe for him anymore. So he left (well, the first part of the journey our couple went with him to guide the way). In this book we see him wander around in the town where he is supposed to find the person who is going to help him. While doing that he finds out that his horse is stolen and thus encounters Talas (Tarasu) whose horse was also stolen (sending her into a big panic).

I adored Talas from the start. She seemed like a caring, kind, sweet girl, and I was very eager to find out her story. Given the story, she should be a bride. But was she married already? Waiting for marriage? Or did something else happens? As we find out what happens (from dearest mother-in-law) I had tears in my eyes. This poor girl. And then to stay with her mother-in-law to take care of her instead of going back home to her family and get married again. That is just the sweetest and the best.

I had a laugh at how how mother-in-law kept making remarks about Mr. Smith and him being a single, how she tried to push both Talas and Mr. Smith together to get married. 😛 This woman is awesome. And also very sweet. She wants to give Talas a future. She wants her to go out and be together with someone. Mother-in-law isn’t the youngest and she is worried that Talas would end up all alone in this place in the middle of nowhere that the two of them live at.

And I was definitely rooting for Talas and Mr. Smith to end up together. This may sounds weird but I do feel there was a great connection between the two, and I did see some sparks fly when they talked or when they were together. I do have to say I was quite happy with how Mr. Smith handled things. He didn’t immediately say yes when things go to a certain point, instead he wanted to make sure that Talas was definitely OK with everything. Of course this brought some confusion with his other friends (his guide and three people who he already met earlier). They think it is weird that he is so hesitant. They try to encourage him to just go for it. Talas is a sweet girl, she is willing, he has permission from the family. Go for it.

We also see Mr. Smith gets in a bit of a pickle with people who apparently don’t get the concept of researchers travelling around and writing things down because they think it is all interesting. Then again, I get that they may be suspicious given he was riding a very fancy horse (which he got from Talas).
I wish that the author had shown the time going by (in the jail) a bit better than just giving Mr. Smith a beard all of the sudden (really, it just felt magical, one moment he had nothing and the next, poof beard).

The ending had me in tears and I was so so sad. I do hope that these two are able to meet again, they were so happy together, and I was hoping to see a marriage happening soon.

We also see a bit more of Mr. Smith without his glasses, and oh boy, he is sure is hot. 😛 Can we have more shots of him looking quite sexy instead of him looking like a messy researcher? Aww, please?

The art is gorgeous once again, there were quite a few scenes that were my favourite. Like the food parts (making me long for those foreign foods), but also the scene in which Talas unwraps all her stuff from around her head and we finally see her head/hair/face and then she proceeds to stand in the wind and it made her hair twirls around her. It was just so beautiful.

Oh, and in between stuff we see Tireke (from the previous books). She is now of age to find a husband, but we all know how Tireke is so this won’t be easy. However, with that certain event happening… <3 <3 Hopefully we will see how that ended in the next one. I can’t wait.

All in all, I could probably talk a bit longer about this book, but I feel I have said what I wanted, and I just can’t wait for the next volume. Mr. Smith has a long journey ahead of him and I can’t wait to see who and what he will encounter on his way.