Welcome to a brand-new Nerd Blast(!!) this time for the newest book by Margaret Peterson, The Summer of Broken Things. A book with secrets, family, old friends, and a very pretty cover!

Today’s post features information on book/author, and a great INT giveaway (you can win a copy of the book)!

Let’s get to nerd blasting. 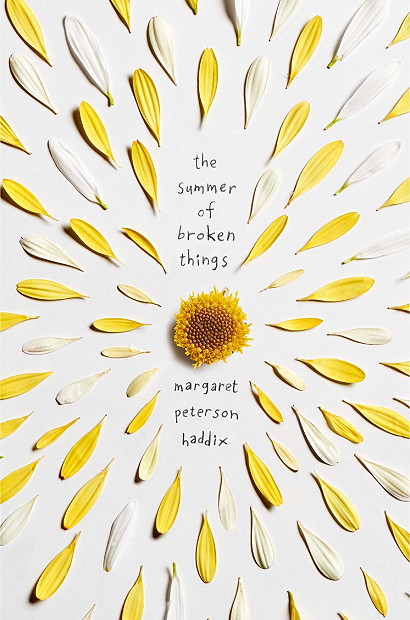 From New York Times bestselling author Margaret Peterson Haddix comes a haunting novel about friendship and what it really means to be a family in the face of lies and betrayal.

Fourteen-year-old Avery Armisted is athletic, rich, and pretty. Sixteen-year-old Kayla Butts is known as “butt-girl” at school. The two girls were friends as little kids, but that’s ancient history now. So it’s a huge surprise when Avery’s father offers to bring Kayla along on a summer trip to Spain. Avery is horrified that her father thinks he can choose her friends—and make her miss soccer camp. Kayla struggles just to imagine leaving the confines of her small town.

But in Spain, the two uncover a secret their families had hidden from both of them their entire lives. Maybe the girls can put aside their differences and work through it together. Or maybe the lies and betrayal will only push them—and their families—farther apart.

Margaret Peterson Haddix weaves together two completely separate lives in this engaging novel that explores what it really means to be a family—and what to do when it’s all falling apart.

Margaret Peterson Haddix grew up on a farm near Washington Court House, Ohio. She graduated from Miami University (of Ohio) with degrees in English/journalism, English/creative writing and history. Before her first book was published, she worked as a newspaper copy editor in Fort Wayne, Indiana; a newspaper reporter in Indianapolis; and a community college instructor and freelance writer in Danville, Illinois.
She has since written more than 40 books for kids and teens, including Running Out of Time; Double Identity; Uprising; The Always War; the Shadow Children series; the Missing series; the Children of Exile series; the Under Their Skin duology; and The Palace Chronicles. She also wrote Into the Gauntlet, the tenth book in the 39 Clues series. Her books have been honored with New York Times bestseller status, the International Reading Association’s Children’s Book Award; American Library Association Best Book and Quick Pick for Reluctant Young Adult Readers notations; and numerous state reader’s choice awards. They have also been translated into more than twenty different languages.
Haddix and her husband, Doug, now live in Columbus, Ohio. They are the parents of two grown kids.