Welcome to a new Waiting on Wednesday, this time a second book in a series. A book I am kind of on the fence about. On the one hand I am excited, as this book doesn’t feature the MC from the previous book (at least going by the blurb). Instead it features two other characters. But on the other hand there was enough wrong with the first book that I am not sure if I will enjoy this new book. But I will give it a try, I am always up for giving authors and series a second chance. Who knows, maybe this one will surprise me, maybe this one will become a favourite.

There is still some time before it comes out though, but that gives me time to prepare. 😛 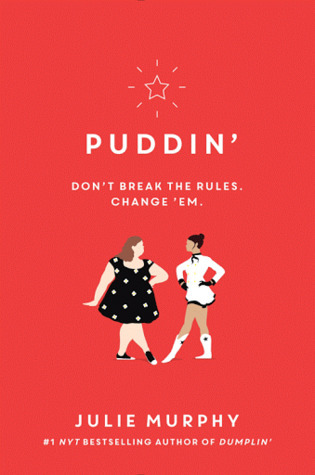 It is a companion novel to Dumplin’, which follows supporting characters from the first book in the months after Willowdean’s star turn in the Clover City pageant.

Millie Michalchuk has gone to fat camp every year since she was a girl. Not this year. This year she has new plans to chase her secret dream—and to kiss her crush. Callie Reyes is the pretty girl who is next in line for dance team captain and has the popular boyfriend. But when it comes to other girls, she’s more frenemy than friend. When circumstances bring the girls together over the course of a semester, they will surprise everyone (especially themselves) by realizing they might have more in common than they ever imagined.

2 thoughts on “Waiting on Wednesday ~ Puddin’”