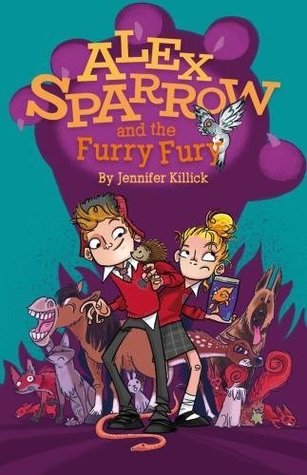 “I would not let her chill my buzz. ‘Anyway, what did he say? Is it a mission? IS IT A MISSION?'”

After the success of the first book, I just was hoping for the second book. And a bit longer for it to actually come out. But it is now in my hands, and I just had too much fun reading it. Farts, animals out for revenge, missions, more farts, twitches, talking to animals, and a lot more.

At first everything seems to be going pretty OK, a bit boring if we have to believe Alex who would rather have constant action and missions. But luckily for him there will soon be a new case for him, and Jess, to solve. Something that needs both of their powers. Alex and his lie detector farts, Jess with her animal talking. At first the case seems to be just some stuff happening, animals going bonkers (watch out for that squirrel, it may just want to steal your phone), but then something more happens and our duo is up to their necks in everything. The case takes a turn for the worse when there are kidnappings happening all over town, and not just pets, but also rescues at the place where Jess and Alex are working after school. What is going on, who is behind it (I wasn’t surprised when it turned out to be that person, they were my prime suspect + I also had a suspicion on who the big baddie was), and also who or what is The Storm? I was pretty horrified when the story took a turn for the worse, those poor animals. I can imagine that The Storm is pretty peed at humans, I would also be peed off if someone did that crap to me. 😐 Still, as Alex said, to take it out on all humans is a bit far, as, just like with animals, you have good and bad people. I am glad that they managed to talk though. Because while Alex and Jess’s powers are awesome, they could always use some help in this case.

I was just so awwing when Alex fell head over heels in love with a tiny little hedgehog! Aww, he is always acting so tough (though since we can see the story from his POV we know that at times he also just wants a good cry or a hug from his mom), but he was just so adorable with Mr. Prickles. I loved that, while Alex couldn’t communicate with him the way Jess could, he still found a way to communicate. Through kisses, nuzzles, hugs, and love. 🙂 I was constantly worried though for Mr. Prickles with that scary dude stealing pets/animals. I am happy that Alex even buttered up his mum so he could potentially have Mr. Prickles as a pet. Give him a happy home. I won’t spoil if he managed to get Mr. Prickles in the end, you will just have to read this book.

Agent Bob, or just goldfish Bob is also back. He is a great asset to our duo, though I have to say at times he was a bit annoying. Like with Alex, I am totally shipping Belle. 😛

There is tons of banter between Jess and Alex, and I just adore them together. I am so happy that they are such good friends, and that so far no loveydovey stuff is happening. They are just growing closer together as friends. Even though they have some arguments in this one, and I applaud Jess and her patience with Alex and his stupidity.
It was also nice/interesting that the author also made this one about them wondering if they could share each other’s powers. Since it would be handy to have some lie detection when talking to animals, and it would save Jess a lot of time if she didn’t need to keep translating stuff for Alex. Not only that, but of course Alex feels like he got the short end of the power stick with his farting lie detection. And I can imagine. While Jess has the twitches when she talks, at least she can do something awesome, plus she doesn’t have a cloud of fart around her any time someone lies (be that yourself or someone else).

I loved seeing the duo go on missions (as that is what Alex calls them), do research, get help from Darth Dave, talk to the professor, check out various places, let loose a snake, and more.

We also have a new character, Rex, and I am not too sure how I feel about the guy. On the one hand he seems very nice, but on the other hand… eh. I did feel sorry for him that he was treated like this by his mom. Um, madam, your kid is NOT a dog. No need to whistle or give him commands. That is just so sad. 🙁 And it didn’t help that at school he didn’t have any fun as Jason, bully extra ordinaire, is now targeting Rex. 🙁

Oh, and I am still wondering if Alex is acting dumb, or if he is really that dumb. There were quite a few instances in this book that had me go: What? Why? How? Are you 3 year old?. Like him not knowing what RIP really meant, or some other basic stuff.
But still he is a fabulous character with great imagination and even if he doesn’t know some basic facts about life, he does know other things.

The ending made me cry and also made me happy.

Pluspoints to the cover and especially seeing all the animals from the book. Also I see that Jess is rolling her eyeballs back in her skull again. 😉

Well I could talk for a lot longer about this book, but I think I will just stop here before this review gets too long. I just loved everything about it and flew through it. Laughing, cheering, laughing so hard that I snorted, sniffling, laughing. Lot of laughing. I got a ton of new fun quotes.
I hope that there will be more books with Alex and Jess. Given the ending, I would say so, but one never knows. crosses her fingers and hopes
I would highly recommend this book to everyone.