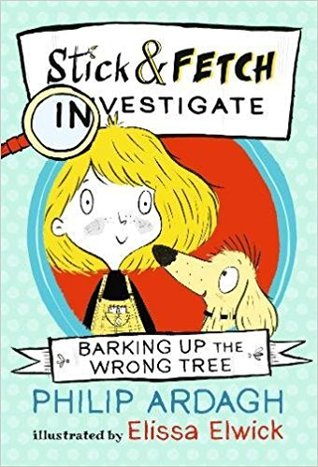 Stick and Fetch are on the case!

I just had to have this adorable looking book, I love detective books, especially the MG/YA variants. Now is this not like those books, as these cases are in Sally’s head. Or well, she does do investigations, but the cases are all imaginary. Based on what Sally sees or hears or finds.

I was at first worried about the talking dog, Fetch, as I am not a big fan of non-magical books with talking animals. But I guess, given that no one else can hear Fetch, this is just like the cases these two solve. They are only in Sally’s head. So I didn’t mind it that much when I deducted that.

This book contains 3 cases, each will be investigated and solved by Stick and Fetch. The first case is about a lady who is about to explode (gasp), the second one about clowns and birthday parties and pictures, the third and last about an eighty year old balloon and an art robbery.

With every case I was surprised that Sally didn’t think about the most logical things first but instead made the cases way bigger than they were. For instance in the first case she doesn’t think that the lady may have a tv on in her home, instead she goes to the tv show. In the second one she immediately thinks there is a case when she sees an empty picture frame, and for some reason gets into clown business and birthday parties. In the last one she really thinks that just because a balloon has 80 on it, it is 80 years old. I get this is a kid, but there were just so many things that didn’t match up. For instance I know that kids generally learn to write around the age of 3 to 5. Since Sally can’t write for life, she must be younger than that, but then the problem arises on why she is allowed to go outside so far without any guidance. So she must be older, but yet, that also doesn’t work out. I guess I shouldn’t think about it and just go with the flow. 😛

Even with the inconsistencies I had lots of fun reading this book, Stick/Sally was an adorable character and I really like how dedicated she is to solving these cases, even if they are only in her head. I had quite a laugh at how easily she forgot about what started the case. Like in the first one that she totally forgot about the woman’s name when she finally meets her. I loved that she knew so much about being a detective. She knew all the terms and knew what to do when. I am sure that, when she is older and will do real cases, she will be awesome at them.

Fetch was a cute dog, a bit annoying due to the talking part. He really helps out with the imaginary cases by catching the crooks.

The art was just adorable, it was also one of the reasons why I got this book. I saw some pictures on Twitter and fell in love.

All in all, this was definitely very fun to read and I hope that there will be more Stick and Fetch books in the future. I would recommend this book, just be sure to not think too much about the things that don’t match.