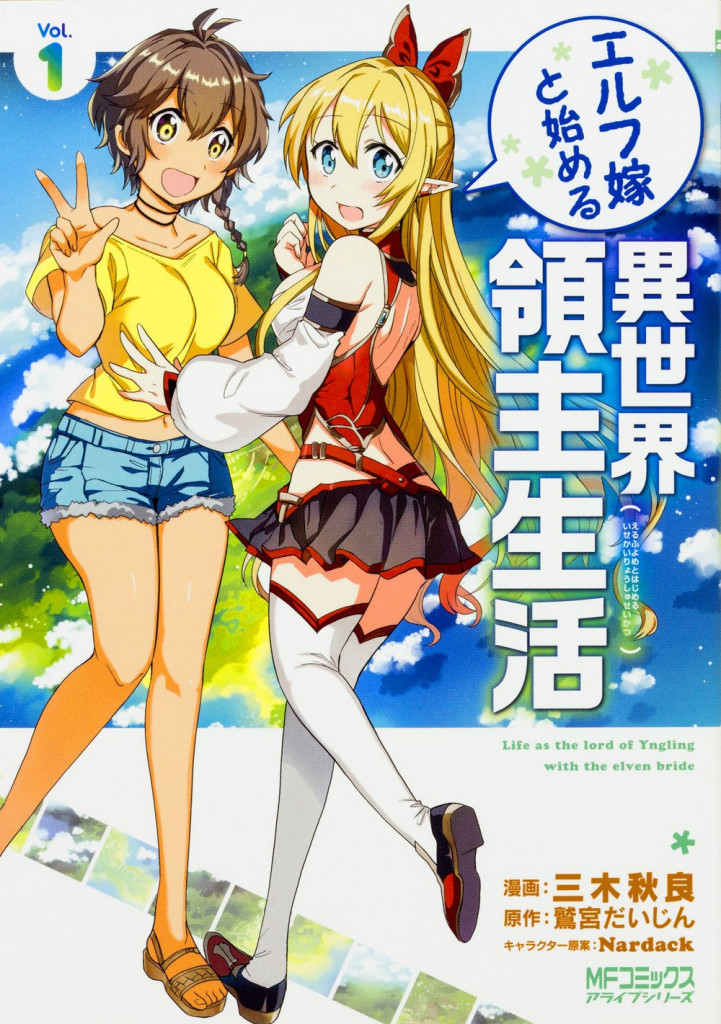 Elves, cosplay, romance, and a sudden appearance of new land connected to the island of Aoga Island that will bring some trouble with it.

I was definitely curious about this one, the cover really sparked my interest (especially the right girl), and so I decided to read it. Sadly, I have to say that while it was funny, the first part (3 chapters) were quite funny and interesting, but it quickly got to a bit bland/boring. Maybe it is just that I am currently not really into harem manga. I would just like a guy who goes for one girl instead.

But the start, the prologue, was pretty funny. I had a laugh at how happy Akuseria was so delighted with her shirt (even if it said Cow on it), and then was totally going kill mode when she found out that Misaki (childhood friend of Yuta) had the same shirt. Tactful dude, very tactful, may you rest in pieces, um peace. 😛

I also quite liked the first chapters, well, as soon as we lose Misaki. Sorry, I just didn’t like the girl. She was just too standard the girl next door and also quite annoying. I did like that she was doing cosplay though, especially since it mustn’t be easy to be in a tiny village and loving cosplay. I am sure that she would be a hit at Comiket or other events. Now she just needs to save tons of money to get to Tokyo. But other than this, she just needs to get the hint. Plus it was just too big of a coincidence that she was there in his house to take care of the two elves. Oh, yes, Yuta’s onee-chan asked me to help out. Yeah, sure.

I loved that Yuta’s island is now connected to a part of Akuseria’s world. That was quite the brilliant idea of Akuseria’s mom. I loved how Yuta stumbled upon it though. And then how he got to meet his new bride to be, Akuseria. I had a laugh that he at first thought she was a foreign cosplayer. He did show his worth though when he helped her out (though RIP that dragon getting speared in the ass).

A wise lesson to everyone, if you ever meet an elf, don’t tug or touch their ears. By doing that you may accidentally propose to said elf. 😛

It was quite fun to see Akuseria figure out all the things that Yuta was doing or using. I am pretty sure we will see more of that as the story goes on. I do hope that she will also learn to be a bit more independent instead of not even being able to do her own buttons without help of her guard.

The art is pretty fabulous, well the designs of the girls. I am just not impressed with Yuta’s design. He seems a bit of an afterthought. Poor dude.

All in all, I did enjoy reading this one, but again, I am also not sure if I want to continue. Maybe when I am in the mood for a harem manga and won’t mind reading about the girl next door annoying type.