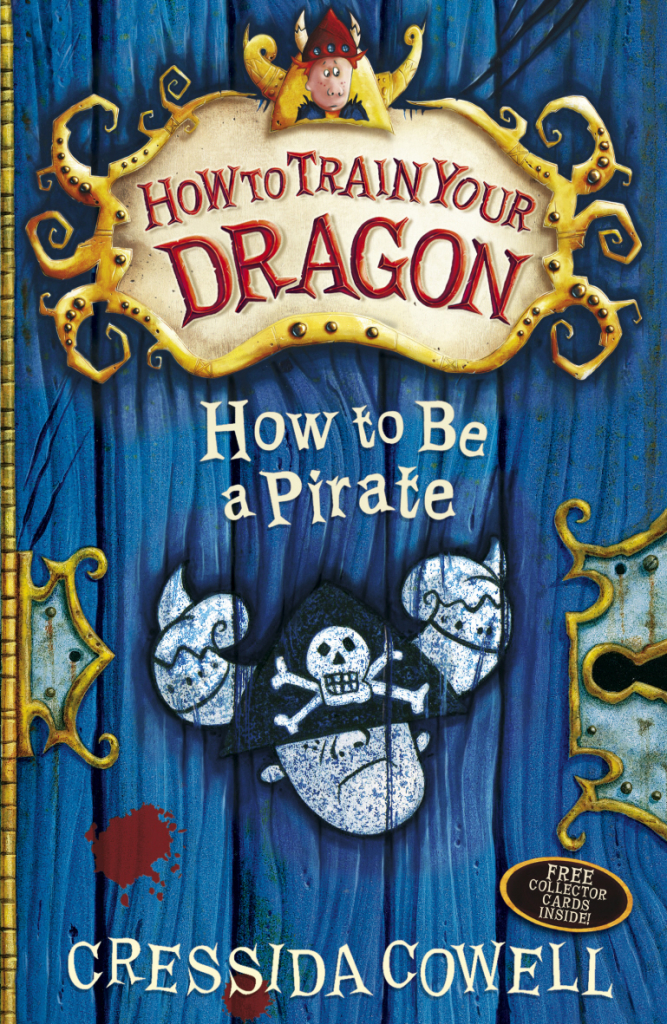 Pirates, treasures, bumbling vikings, dragons, and creatures that will raise the hairs on your arms.

My third HtTYD book, and second in this fabulous series! Yep, I am definitely enjoying my time in this world as it is just so much fun. At times I do feel sorry for Hiccup, but I know that he will end up all right, after all he is the hero of the book + just like the other books he apparently does something amazing every book.

I still feel sad that he gets bullied so much. Sure, he is not like the other viking kids, he is short, not too strong, relies more on his brain and imagination, he can speak dragonese, he is not too violent (as it seems most of those kids are). He gets kicked, walked over, and during that fight on the ship in the beginning almost killed. 🙁 I get that this is just the way of the vikings, but I still sad for the little guy.

But thankfully Hiccup is not one who just stands by, and thanks to his help and use of dragonese he gets his tribe out of a pickle quite a few times. Plus he shows tons of bravery at many points in these books. He also shows he cares about his friend, Fishleg, and then at the end, even about his tribe. Yep, his tribe. He is starting accept that he is the heir, that he is the upcoming boss. That he has to care for these bumbling violent idiots one day. But you can also see that he is affected by what happens around him, at times it makes him sad or withdrawn, but he also seems to borrow from that and get stronger. Plus while he has a dragon that is worthless, he still says, mostly, kind to it. He tries to get Toothless to do stuff without the usual shouting that the vikings use for their dragons.

And in this book we have pirates! Yep, viking pirates. It is time for our boys to learn some pirate skills. So that means lessons on a boat, sword fighting on a boat, finding treasure. I had to wonder, do they not learn these boys swimming before that? As Fishlegs cannot swim and I wonder if there are others like him.

We have a new character and I didn’t trust him from the start. He was just a bit too slimy and ick for me. He reminded me a bit of a shady car-seller. I was just waiting for him to reveal his real side, because I knew that would happen sooner or later. I did feel sorry for the vikings, and also for Hiccup. Especially Hiccup, as he thought he had found a new friend. Someone who was helping him with sword fighting, someone to talk to. Someone who had amazing stories to tell.

The treasure hunt, and that island full of dreadful monsters? Oh my, I would have NOPED my way out of there before we left our island. Dang, those dragons/monsters are creepy as hell, and a bit too dedicated to killing and maiming. Not a good holiday spot. 😛

The ending and all that happened there was just absolute brilliance. Why of course, it is because of that that Hiccup couldn’t do sword fighting well. And then there was that monster that we met a bit earlier on, even more creepy and disgusting and NOPE than I already thought. I was definitely rooting for Hiccup to get his brain to work and figure out a fantastic plan.

The book is also illustrated, and with each book I am getting more and more used to the style. By now I actually like it and I think it is pretty original/creative.

All in all, I still have books 3, 5, 6, 7, 8 to go before I got to buy the next boxset/books. I am not too sure if I will be buying them immediately, I may just savour this series a bit longer and spread buying them out over several months.