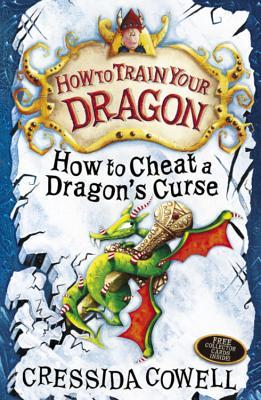 “Sometimes it is not until the Final Chapter that you realise what a quest has REALLY been about all along.”

So thanks to Haley Mathiot on Goodreads for recommending that I should read this series. Sadly, out of my 4 libraries only one had 1 book from this series in English. So I guess I will just have to buy them now.

This was definitely a lot of fun to read, but my biggest problem, and also reason why I am not rating it 5 star, is Toothless. An annoying pest of a dragon with an attitude. At one point I just wanted to put him in the cauldron of onion soup and leave him there forever. He was arrogant, frustrating, and only cared about himself.

Other than that the story was fun, interesting, and hilarious. Hiccup is the son of the chief, but he is not like most boys. He is scrawny, relies on his brain more than his brawn, is not so good at many things. So he is getting shunned at times. I have to say I took an instant liking to this little guy. He showed, many many times, that sometimes you need a brain to survive and not brawn. He was also quite brave and went very far for his friend, Fishleg (though I prefer what Hiccup’s father calls him: Fisheggs). He stood up against his dad. He went on a quest. Yep, I just love a guy who despite what fate has thrown at him will fight and just go on with stuff.
I like that he can speak/understand Dragonese. That is certainly a handy skill to have, especially if one later becomes the chief of a whole village.

The quest that he undertakes for his best friend was exciting, but also hilarious. Who would have thought that the cure for that disease is a potato? I wouldn’t. Now I can hear you say that such a cure should be easy. Um, yeah. That is the problem. Potatoes only grew in America back then. Luckily for Hiccup though, the neighbouring village of vikings has been to America (or at least their former chief did) and brought back one potato. Yep. ONE potato. And guess what Hiccup is going to be doing? You may have guessed it, but yes, he is on a quest to get that potato. For his friend.
I just loved reading about his adventure to the village, his encounter with the Doomfang, then all that happened at the Hysterics village and the journey back. Oh boy. I definitely couldn’t stop reading.

I also loved seeing what the two villages did on Freya’sday. Feasting, sports, guessing what is in the ice cube (I want to participate!).

Camicazi (love her name) was just the best side character. She was strong, fun, brave, and I loved how swift she was and how nimble her fingers were with stealing stuff.

So dragons, vikings, potatoes, skiing (yes, really), and more. Oh, and I shouldn’t forget the illustrations, I am still not entirely sure if I like them or not, but I am slowly starting to see the charm of them. 🙂

All in all, this was one fun book, and I definitely need more Hiccup and taming dragons.