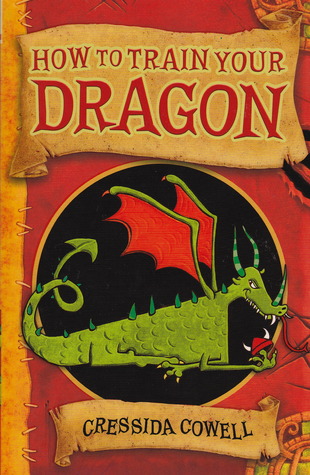 The first book in which we meet Hiccup, discover dragons, YELL AT SAID DRAGONS, have a party, oh and did I mention the giant dragons that come to disturb the peace? Ah, no, well, they will pop around for some snacks as well.

After reading book 4 (the only book one of my libraries had in English) and really liking this series, I decided to just buy the books. And what does one do when one wants the books, indeed, just buy the 8 books boxset. 😛 Sure, RIP my TBR (which was finally going down), but yay me!

In this one we meet Hiccup, a short boy in the midst of many tougher boys. But Hiccup got something they clearly don’t all have, brains and imagination. Yes, he may seem like he doesn’t fit in with his role, the one of the Chief’s son, the one to one day rule the village. But believe me when I say that I think that a smarter chief would be a nice change. Because brawn is good to have (and who knows what happens in Hiccup’s puberty, for all we know he becomes super tall and buff), but brains and imagination also work wonders. As is also shown in this book at several moments, and most importantly during the last parts, when two giant dragons pop up and everyone’s only idea of getting rid of it/them is to YELL AT THEM FROM THE TOP OF THEIR LUNGS (because that is what that book from a dragon expert is telling them to do).

Toothless also makes an appearance, as every boy of Hiccup’s age, or at least those who want to be initiated in the tribe, need to have a dragon. Boy, I want that as well, give me a dragon any day. I was already wondering in book 4 how Hiccup got Toothless, I just couldn’t imagine him picking a dragon like that. But apparently, when in a hurry you do strange things (plus something to do with fate it seems, RIP Hiccup, fate seems to have a nice laughing fit about him). Throughout the book I wanted to strangle Toothless and I kept wishing maybe one of the proper dragons would just eat him. He is whiny, worthless piece of dragon. And sure, he shows his worth, but I still don’t think one WOW moments saves him for me. He needs to do a lot less whining, a lot more obeying. He needs to be kinder to Hiccup who is treating him so well.

I felt sorry for Hiccup at many points in the book. He doesn’t have the easiest life and gets bullied by Snotlout (and some of the other boys, but generally Snotlout). I am glad that he at least stays upright and tries to get through the days. He just tries his best, and I am glad he also has bravery and the guts to at times stand up for himself.

I was also happy to see that Hiccup has a mom! In the 4th book I thought that there were no woman in the village (as we never meet them). But apparently they are around, I wonder what happened to them then, or if they are just hidden well.

The ending was very exciting, and I was worried for Hiccup at times. I am really proud of what he cooked up. If you can’t beat the beast with strength, than do it with brains. 😛 I was surprised at what the dragon knew, that is quite creepy and makes the dragon even more dangerous.

Oh, and even with a son like Hiccup, I just adore his father and how caring and protective he is of Hiccup.

Of course the book is also full with illustrations. Again, still not entire sold on the style, but after 3 books by this author I am starting to quite like them. They have a certain charm.

All in all, I will soon be reading book 2 as I want to know what happens next. I would recommend this book to all.