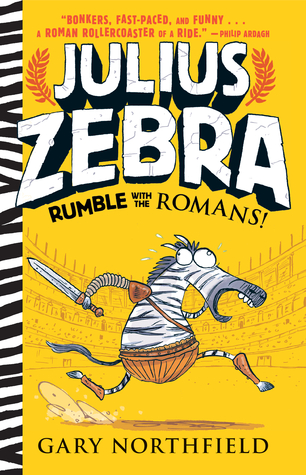 I read this one in Dutch, but my review will be English.

FINALLY, finally I had a chance to read this book. It was in Dutch, which is a bit eh, but I am still so so happy that I finally had the chance to read this one that I actually don’t care. Now I can finally find out what happened to Julius, how he met his friends, how they got captured, how they turned in awesome gladiators. Squee!

So in this one we meet our, unlikely hero, Julius. A zebra with his own will. 😛 Really, any zebra would be happy (or relatively happy) to go to a pool of cool water. But not Julius. Oh no. It was not the best meeting I have to say, it is that I know that Julius will be a great character in the end, or I would probably have started not liking this zebra. Things go classically wrong and Julius, and also 2 others who will be his friends later on, Cornelius and Milus. Yes, I would say that Milus is their friend. Even if he would fervently deny it all, he is still caring about them, somewhere. 😛

And thus they get dragged to Rome, to the gladiator tournaments. Where we meet the rest of the gang. I was happy to see them all together, and then see them try to fight for their lives. Though you can imagine how that looks given that, with the exception of Milus, none of them know what the hell to do. So it was equal parts hilarity and excitement. I was definitely impressed with Julius. I knew he was great, but this great? Plus I loved what he did for his new friends.

The training for gladiators was pretty fun to watch, if it wasn’t for those annoying human gladiators who really need to get their heads out of their butts. Gee, he already said he was sorry and that the didn’t mean it the way he meant it. And yes, he humiliated you, but come on, that is how it works in gladiator stuff. I did like that the animals were so dedicated to the cause. And that Plinie was helping them out afterwards with some more training. Oh, and I didn’t even think Plinie was that annoying in this one. cheers

The two fights at the end were fun to see and oh so very exciting. I definitely had to resist to flip through the pages and just get to the ending. Though, since I already read the second book, I should have known it would all go well.

I just adored the expressions on the animals (and humans). They were so silly and over the top. Especially Julius had some fabulous expression ranging from demented to crazy to something that should pass as normal.

Plus points to the roman numerals at the bottom of the page. Something different from the normal page numbering.

And of course this book is also stuffed to the brim with illustrations. At times stand-alone just giving a better look at things, but mostly a continuation of the story. It makes the read even more engaging and fun (and also funnier).

The Dutch translation was really well done. Sometimes humour doesn’t get translated well (like with Disc World for instance), but in this one the translator managed to translate and hold the humour. Good job!

All in all, I need book 4 now! I want more adventures of Julius and his friends.