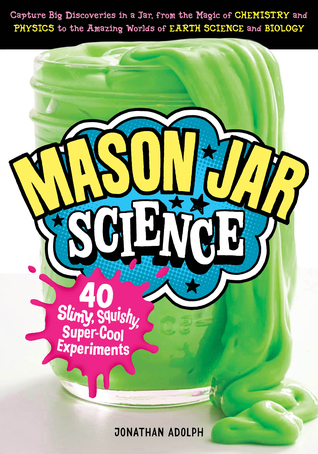 I was really interested in this one, I wanted to see what cool things they were going to do with mason jars, and the first part (with slimes and all that) was great, but after that?

I just lost my interest. Not only because the experiments were kind of boring, but because I have already read about experiments like this. Tornado in a jar? Check. Ecosystem? Check. Caterpillars? Check. Making a Stalactite? Check. Making candy? Check. And I could go on. I just wished they would pick some new experiments, I am sure there are tons of them out there and it is just a shame that they picked those that are featured heavily already in so many books. I am sure there are tons of new (and more interesting) experiments they could have featured, especially with so many Youtube videos doing a lot of awesome stuff.

But the slimes were fun, though I still think it is funny that it is coming back again, slimes were also popular when I was a kid, though we generally didn’t use the ingredients the kids use these days. 😛

Plus I did think it was a bit of a shame that some ingredients, but also one or so experiments are just impossible if you live in the EU. Hummingbirds? Sorry, I have only seen them in documentaries or in books, and maybe in the zoo (not sure about that though). Several ingredients are probably found here, but it is hard and would require a lot of asking around, and I have no clue what alternatives would fit. Same goes for measurements or temperatures, I would have to calculate those as well as I am living in a country that uses Metric and Celsius (oh wait, almost everyone uses Celsius :P). There is a chart at the end of the book, but I do think it is easier to just grab my phone or computer instead of flipping back and forth between that page. But it is nice that they at least added a chart, so props to that.

I did like that the information was clear, the steps (along with photos) were nice and easy to follow along, I also liked that we got some extra information that explains the experiments some more. Plus there were also some fun facts that fit with the experiments.

And kudos to the fact that almost all these experiments can be done without adult supervision. I know that, as a kid, I also much more preferred to do my own thing, and not have an adult hang around to help/do stuff. Kids can just try these on their own.

But yeah, I had higher expectations. I am not too sure if I would recommend it. It was fun, but again, I would like to see some newer experiments instead of so many of the same ones.