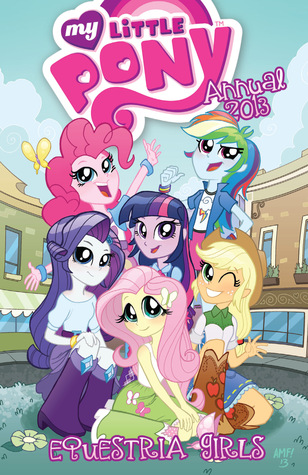 My first MLP comic, and it was pretty fun to read!

This is one of my two picks for Copycat challenge for one of my groups. Never really tried out anything MLP, but this was pretty adorable, I definitely liked that the girls were for most normal girls.

The comic starts with an evil (at least I would call her that based on various parts in this comic) pony called Sunset Shimmer pass her test in flying colours. At that point I did quite like her, it wasn’t until she went totally bonkers about a mirror and then did all sorts of stuff that I started disliking her. I definitely hadn’t expected to see her again as soon as she passed through the mirror. I guess I could have seen it coming given how cunning and evil she is. And let’s not forget dedicated to get her future to be the one she wants.

The rest of the comic is pretty much an introduction to the good girls/ponies. Well, I say girls, as they aren’t ponies in this one. They are human. Well, as human as one can be when they look the way the girls do. 😛

Someone is filming the girls, asking them all about their friendship, how they experienced the first day and other stuff. From then we see the girls look back to those moments. It was really fun to read, and I liked the idea of someone interviewing the girls. Though I have to say I quickly got annoyed of the pink girl, Pinkie Pie. And as the comic continued I started to feel more and more frustrated with her attitude. Get the hint girl and just shove off. 😐

My favourite girl? Rarity. I just love a girl who can be both popular and nice. I was worried she would turn to be another mean girl, but instead she cares about all the girls (even giving one clothes when there was a food accident). She is also not afraid to give her opinion on stuff.

Applejack? I am still not sure what to make of this girl. At times I liked her, at other times I was just frustrated with her. I am not sure how to explain my frustration with her. Most of the times she was in the story she was getting used to the new school, was trying to figure out how to act, if she should listen to those girls and change her look.

Rainbow Dash, well I loved how dedicated she was to sports, but I hope that she learned a lesson in this one. Soccer is a team sport. No matter how good you are, there is a whole team of girls also playing. Her rainbow hair was pretty dang awesome, I wish I could have my hair like that. dreams

Fluttershy, well I am not too sure, I had to look up her name as she was totally not that much of a presence for me. Most of the story seemed to take a spotlight to Rarity, Applejack, and Rainbow Dash. She has her moments, but mostly she just seemed to fade in the background.

The art was pretty decent. At times it was a bit wonky, but generally I quite liked the artstyle. Plus I loved how colourful it all was.

Then there was the ending, and I was definitely surprised. Then again, I guess, given the beginning and what happened when she passed the mirror, I could have expected it. Still, I didn’t!

All in all, I want more MLP, which should be all right as still got another comic to read for my copycat challenge. And who knows, maybe I will just watch the series as well.