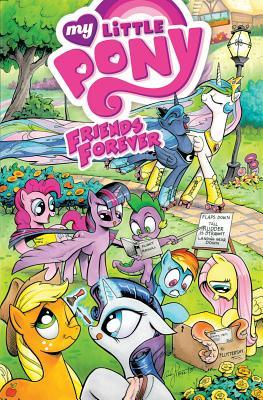 It is time for 4 stories about our pony girls! From baking to ghosts.

I had to read this one for a copycat challenge in one of my groups. I have always been a bit curious about MLP, though never made the step to actually try it out. I have to say that after reading this I may just not read the comics, but instead check out the tv series and see if that works out better.

Yes, I had fun reading this one, but I had expected more story, more connectivity, instead I got 4 different stories with various characters. There is no real introduction, you are just thrown into the MLP world. You are expected to know all of them it seems. I would rather have had one introductory story, and then I may have enjoyed the other stories more.

I really liked the last one as I loved Twilight Sparkle instantly + the ghost story was fun, exciting, and I just wanted to know more. What was lurking in the castle? Would Twilight Sparkle and her brother get the chance to band up again like they did back in the past? And also it featured books, so many books! How can I resist a monster/ghost that loves books?

The art was a bit of a mixed bag. There are quite a few illustrators working on the story, and you really noticed the difference between the stories. Still I love the designs of the ponies, I love how colour and fun they are. I have to say that I like them more in the pony-form (I also read the annual for this series and there the girls were human (though still in their pony colours)).

All in all, I did enjoy reading these stories and I quite like the girls (Twilight Sparkle and Pinkie Pie are just the best). But I am not sure if I will continue reading these comics, I think maybe the randomness works better animated.