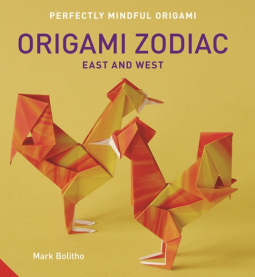 Ah, an origami book, I do love those. And my boyfriend as well. I was very much curious about this one as it combined East and West Zodiacs/Horoscopes together. Something I quite love. Yesterday we decided to finally go for it and try out this book. I have written 600+ words in Dutch as notes, and I will do my best to translate those in a coherent English review.

First the good stuff, before I start the bad stuff and also our feelings on the book (as those turned from slightly positive to very much negative).

As I said, I love that this book features zodiacs. The book itself is split up in two parts, West and East. I was looking forward to folding dragons, Pisces, Aquarius, horses and others.

I loved that measurements were given for how big the creature would turn out to be and also for how big the paper had to be to get the best results. Not all books do that, so points to that.

Now for something that was on the border of good/bad. Quality of the pictures were great (how it was supposed to look/the end results), however, my boyfriend and I did notice that quite often the pictures and our results (after following the instructions best we could) just didn’t match. For instance the dragon, if you look at the end result it looks to have decently sized front legs, yet they turned out so microscopic tiny that he just toppled over if you didn’t help him out. 😛

So our journey through the book, we eventually tried out 4 figures before rage-quitting and giving up. Dragon and Cancer failed horribly/we gave up, Snake went pretty OK, Pisces had some arguments but turned out fine.

I was planning on participating in the folding, but in the end I decided to just watch, cheer, help out, and even wrote a ton of notes (more than I normally do). I just saw that this one was not for me. I love origami, but it has to be fun for me, not give me a headache. And I could just see that this one would bring me tons of frustration and unhappiness.

First Cancer. I really loved the looked on this one, so this would have to the very first one we tried. I picked a cute origami paper to get folding. We saw that this one was very difficult (would give it way more than 3 stars), but my boyfriend who is a pretty great origami folder, he can do some really amazing ones decided to give it a try (How hard can 3 stars be? Famous last words.). But after 2 pages gave this one up because it got way too tiny, way too messy, and it was too impossible to fold. Our paper should work, it is origami paper, but even with violence (lots of stomping on the paper) we just couldn’t achieve all the folds neat and tidy. We were quite sad as this one is pretty long, and we had been at it for some time. It felt like a waste of time.

After this one my boyfriend was not that motivated to go for the long ones (since we could already guess that they would just get too tiny and impossible), so we kind of skipped a lot (so many of the origami figures have 4 or more pages of instructions) until we reached Pisces. This one was pretty decent to follow, we only had problems with the tail. No matter what we tried we couldn’t replicate the folds that needed to be made to get the tail. So we just pushed, folded it into some tail shape.

More flipping through the book and we came across the dragon (after wondering how the rabbit was truly a rabbit, it looked more like a kangaroo to us). I was very excited as the dragon looked awesome. I picked a cool black/orange origami paper, and let my boyfriend go for it. Sadly, this one brought a whole mountain of frustration to my boyfriend as the instructions just didn’t seem to work out/didn’t match the pictures. As I said, the front legs should be pretty big, but no matter how or what my boyfriend tried the legs kept being tiny as hell. So we gave this one up as well. 🙁

Next, and we decided to do this one last as we were really not in the mood any more and pretty pissed off at the impossibleness of the book, we went for the snake. It seemed easy enough. There were some frustrations, but in the end we managed to get it done!

So in the beginning we were pretty OK with the instructions, they seemed quite clear, but sadly after 2 failed creatures, 1 with a wrong tail I want to correct that to no thank you, this just doesn’t work out. There should be way better explanations + some stuff was just too impossible. And also again, the pictures with the instructions didn’t always seem to match or suddenly turn into something totally different.

So in the end we didn’t have fun. Especially my boyfriend was just unhappy and frustrated. It was TOO hard, TOO impossible, instructions often unclear and instructions > photographs at the beginning totally different. My boyfriend is an amazing origami folder and he has done some fantastic things, and he loves a challenge. However that challenge should be complete-able and not impossible. He was cursing and grumbling and he just felt like he sucked (not a fun feeling, I can tell you that). He also normally doesn’t just give up, he tends to keep going, so it really says something that he gave up 2 out of 4 and then stopped with the entire book.
I wouldn’t recommend this book. Unless you are Superorigami Overlord of awesomeness with skill levels over 9000 and have itty bitty tiny hands (or hire some kids to do it for you). You know what, just go for another book. There are tons of fun origami books out there with simple but also challenging figures that aren’t impossible to do. 😐 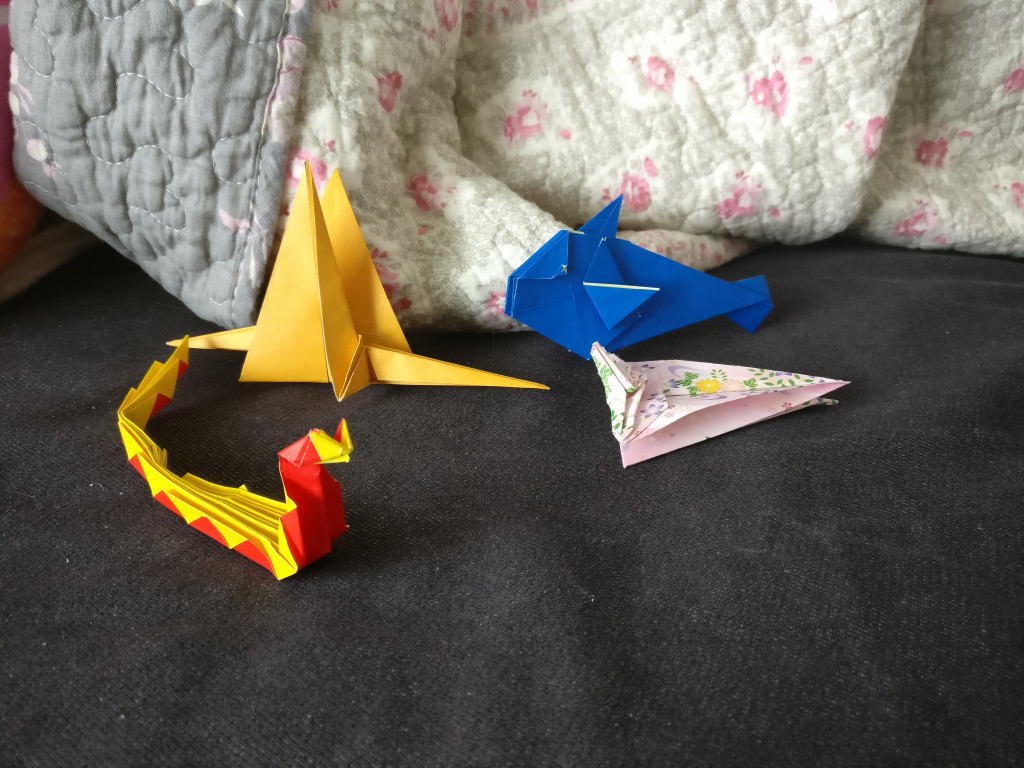