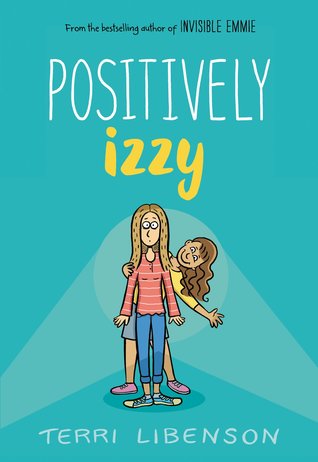 The newest book, this time we have Bri and Izzy.

Well, this was not as good as Invisible Emmie, I was very much confused. And yes, I also was that while reading Emmie’s book, but now even more. Way, even more. Even with that plot twist at the ending, sorry, I had to read another review to get what this meant. I am sure if I hadn’t read that review (or others) I would have been confused and be like, whut, why is the mom called

Throughout the book I kept hoping for a connection, for something that intertwines these girls together. For any hint to their connection. I kept looking in Bri’s story for Izzy and in Izzy’s story I kept looking for Bri. I was wondering where this girl was, as I never saw her, never heard her be mentioned. There was this show, yet I only saw one of the two there. I thought it was going to be yet another case of imagination, but instead it is something totally different.

Out of the two girls, Bri was my favourite. Izzy. Eh, not so much. I thought it was dang awesome that she was so awesome with theater stuff, but I hated how she didn’t do a crap’s worth in school. I get that focusing is hard. I am at at least level 9000 with distraction. 😛 Yet, even though I kept being distracted, I did try my best at school. And sure, my grades weren’t always topnotch, but I tried. And that is what I missed with Izzy. Izzy seemed to not even try. If it was not interesting to her, she would just drop out and go into her little fantasy world. The take out test was just the final drop for me. Telling a bullcrap lie that you didn’t know it was a test, sorry, it is saying that in big letters on the front. Sorry, but come on. And then you go all pissy and angry when your mom finally thinks this is enough and gets angry and grounds you. Sorry, but did you really think that after so many times she would just be merciful? I think the mom was pretty tame even.
I am glad that in the end she did realise several things that probably shocked her as she apparently didn’t care to look around her that much. I can imagine that x did that to her, after all those years, I can imagine that x is just done with it all.

Bri, my favourite girl. She has really changed since the previous book. She was pretty dang bossy in there and I know at times I was just angry at her for treating people like dogs or worse. You can see that at times she forgets to say please, or that she acts a bit bossy, but thankfully she notices pretty fast, or else Emmie just looks at her with a look or tells her. You can really see she is taking an effort in being kinder. Good job girl!
I loved how studious she was, and she was having fun, in her way. She didn’t mind studying, and was pretty happy with her life. I get what her mom was trying to do, but there are other ways to get your kid to have more fun, or get her out of her shell than to force her on a stage. Especially when one only has a few hours. In the end Bri did it, and I was pretty proud, but I was also sad that she had to go through so much stress and fear because of this.
It did bring her closer to her friend though, which made me happy. He really helped her out when she needed it the most.

And yes, we see Emmie again! Not as much as in the previous book, but she is still there and I am happy that she is doing fine. She seems to have quite a lot of fun in the things she does.

Like the previous book one of the POVs is in full comic style, and this time that is Bri’s POV. And also like the previous book, this one switches per chapter. One will be about Bri, then Izzy, then Bri. At times it confused me, but generally I could follow it pretty well, and in the end I was an expert.

The art was once again fabulous, I just adore the style!

All in all, even if I am rating this one a 4 star, I will make an exception for this one and keep it on my shelf. I hope there will be another book in this series, though I hope that the connections between the girls are a bit clearer next time.