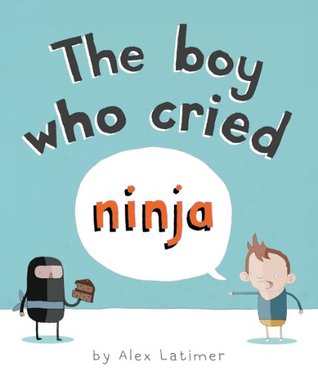 Why cry Wolf when you can cry for Ninjas instead? I would know who I what I would pick.

So I was actually looking to read another book by Alex Latimer, but then I bumped against this book, I was instantly intrigued by the title. A boy who, instead of wolf, cries ninja and thinks of elaborate excuses? Sign me up. And I found some great dudes on Youtube reading this book aloud, which made the book even more hilarious. Especially since they are giving comments on what happens and also adding sound effects.

But apparently this book isn’t just about ninjas! Oh no, this kid thinks of the most fantastic things when making excuses. But are they really excuses? Or is Tim actually telling the truth? I definitely had such a laugh when the truth came out, and then I wondered what Tim would do. Would he keep on going on, even if his parents got angry at him because they didn’t believe him (then again, I could imagine, would you believe it if a kid kept telling you such things?).

I can say that I believed that this would just be a book about a kid crying ninja or another creature and then getting a lesson from it in, hopefully, a fun but educational way, but instead the author grabbed a bit from the Boy who cried Wolf story and then gave his own spin to it. thumbs up

I loved what Tim cooked up in the end, and then seeing the parents (and other people’s) reaction to it.

I am also kind of happy that there is no moral. This is just a fun story about a boy who cried ninja, or mermaid, or no you will have to read what other cries pop up. I am not going to tell you, and the unexpected things that happen after that.

The art? Fabulous, I quite like Alex Latimer’s illustrations. His style is just too much fun.

All in all, I would recommend this silly book to everyone!