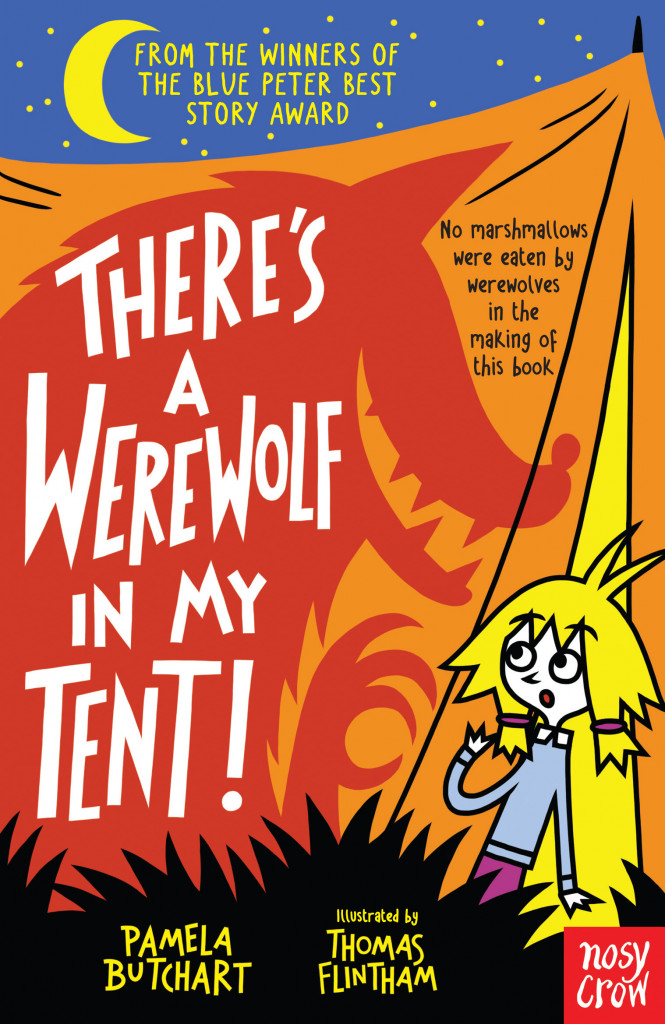 After loving the World Book Day book from this series, I just had HAD to get the rest of this series. So for this month I bought 2 books from the series to see if I would enjoy them as much as I did the shorter book. The answer, after reading 1 book, yes. It was just as fun as the shorter book! If anything it was even funnier because it was much longer.

The friends are going camping, and they are all very excited. Well, mostly, as one of their least favourite teachers is coming with them, Ms. Moon.

The camping was oh so much fun. I had a laugh at what Maisie brought with her, and also loved to see the tents the kids had (poor Zach though). I liked seeing them go for several fun camping things, like bbq, well, as soon as it stopped raining (glad I am not the only one who gets rain while camping). There was a scavenger hunt (OMG Jodi was super competitive), marshmallow eating till you drop, ghost stories.

But as you may have guessed from the title, there are also werewolves. Or at least, our kids are thinking there are werewolves and I don’t blame them. Ms. Moon is definitely acting fishy with her constant meat eating, all the hair (though I kind of guessed what was going on with that since I have been camping and you can’t easily keep that kind of maintenance up all the time), and her strength. It was fun to see them try to figure out what was going on, texting with their other friend who couldn’t come with them and have her relay information on werewolves, buy tons of ham, and more. And then Jodi starts to act up and everything becomes even more chaotic. As for her I knew what was going on as soon as certain details were named, but it was quite funny to see her friends go in full frenzy.

Oh, while I don’t approve of it, I had a laugh at what the kids did at the museum.

Gary? At first I wasn’t sure if I liked him, he seemed quite obnoxious, but he really proved he can be a great character in the later parts. I loved what he did for Jordi, and for the other kids. But I had a laugh at him being so protective of the river that has his name. And not just the name, but also the sign. I was definitely thinking he would steal it with him when they had to come back. 😛

Jodi and her survival stuff? I just love it when characters have a skill or something they really like and are very dedicated about it. I hope that she will get a chance to go survivalling when she is a bit older (or maybe even participate in one of those shows on TV).

What was actually going on with Ms. Moon explains a lot, but there were still a few things that seemed weird + she was still not acting like a teacher for most of the time.

Oh and the art fits just like a glove with this book and its silliness.

All in all, I loved this book, I just had so many laughs while reading this one. I couldn’t stop reading and just had to know and see how everything would come together. I would recommend this book to everyone, and I will be reading the next book I have very soon.