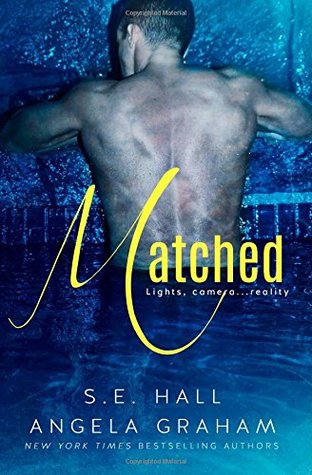 DNF at 55%. This book could have been way better if it was half the size it is now.

I was really interested in this one, I have been in a reality show book mood for a week now, and I couldn’t wait to try this one out. Sadly, it was apparently not meant for me. Normally a book this size is something I get through pretty fast, but I am struggling with it, until I gave up. The story didn’t seem to go anywhere, it was the same dramarama over and over again, and the same annoying characters that I just can’t like. The challenges were fun, as was the idea of the show, and I did like the friendship between the girl. But that is it. I think this book would do much better if, instead of 440 pages, it was 200. Really, by the time I drop out they only had send 2 couples home, and 1 wasn’t a soulmate match (which I could have told you from the start). There are 18 people, 9 couple. Really, get on with it. So I vote all for the 200 pages, it cuts down all that dramarama, gets to the nittygritty and challenges and done.

Not to mention that I didn’t like most of the characters. For instance the love interest of Harlow, Oakley. Dear Lord, what kind of dude is that? Is he stuck in the 1800s? When they expected, no actually forced woman to stay in the kitchen and follow along with every step they do? Sorry, but bro, it is 20something (no clue what time it is in the book), and if a girl wants a career that is totally fabulous. You can’t fucking dismiss it as a hobby. What kind of dick are you. You really want her to just follow you around? Do nothing with her life? Sorry, that is not how it works. Plus stop being so overly possessive. And then when your girl is different from 5 years ago, because no shit Sherlock, people change in 5 years, don’t blame her or say shitty things towards her that she was doing it because she has the hots for a guy (um, hello, she had to do the challenge, and you signed up for this show in the first place, so um, sorry, but you could have known this kind of stuff would happen). Also maybe you should learn to say sorry when you do something wrong, or even check up on your girl when she is feeling crappy or leaving early from a party. Also if a girl clearly doesn’t want to have sex don’t force her (at least that is how it felt to me, she was clearly not comfortable at times to have sex, but he just pushed on). Of course I knew instantly what he is reasoning was why he took his girl with him on this show. Come on, why else would you take her to a show like this? And I could go on, but I just will stop here. Oh one last thing, who the hell doesn’t know how to use email? I can understand a granny of 90 or so years, but even those gals learn and can do it. How can a guy with the age of 18-25 not email?

The Cruz/Emma thing? Sorry, but that just ticked me off. It is cute at first, but throughout the book Cruz acts like Emma is 10 years old instead of a grown-up girl of 21. Constantly he comes to “rescue” her, he butts in with everything she does, he gets aggressive towards any guy just watching his sister, and even threatens to kill one who touches her. It was just frankly disgusting and I don’t get why everyone found it so adorable (well, not everyone, but several people did). Sorry, I don’t think it is a healthy thing if a brother is that obsessed with his sister. I get he is protective, but eventually she should find her own way. Holding her away from stuff is not going to make things better, not for your relationship with her, but also with her and boys. She should learn to make mistakes, and she should find a good guy.

Harlow? I just didn’t like how, at least at first, the girl was just wandering after Oakley and popping up at times he demanded her presence. Later on she started to become more independent and I was definitely delighted. Finally we saw the real Harlow and I quite like the girl. Sure, I didn’t like how nosy she was (to the point that it got quite awkward). But I loved how sweet she was towards her friends, how she tried to help them out, and how they talked and had fun.

The challenges? Fabulous. Not my kind of challenges, no sirree, I wouldn’t want to try those out, but they are still fun and they fit the show and its image perfectly. I also like the premise of the show, who is your soulmate, will people guess it right, will you be disappointed with your soulmate? And who will win? Well, even if I dropped the book at %55 I just couldn’t resist flipped through it fast and get to the end. And I wasn’t surprised at all to see who Harlow was gravitating to as the book progressed, I called that coupling since the start and when we met that person. Yup. It was that obvious.

And boy, I am glad I dropped the book when I did, because when I flipped through I saw a side to Jensen that disgusted me more than he ever did.

Plus what was said in one confession at the beginning pretty much made it clear with whom Oakley would be fated. 😛

I did read the epilogue/reunion parts fully, as I am was curious how it would all end. It was pretty sweet to see how it all ended. I am happy with the couplings and I am definitely happy for Miranda.

All in all, though, there were good elements, but too many bad elements for me to fully enjoy this book. Again, if the book was half the size it would probably be way better.

Oh, but I am giving some extra points for the cover.