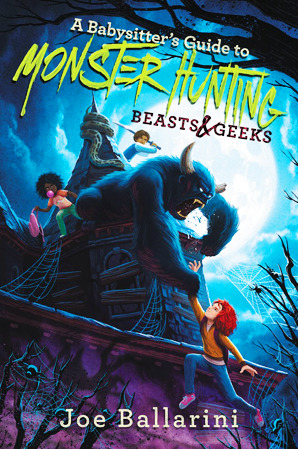 This was an amazing, awesome, fabulous, OMG YOU NEED TO READ THIS book. 🙂

I was so excited when this book came out, and I just had to read it instantly. And I am happy I did as I couldn’t stop reading, it was just too good, too exciting. Sure, there were a few things that made me roll my eyes.

Kelly is back, and we instantly jump into the action as Kelly is at a very important camp. She wants to become a babysitter for real and has to show all she can to be allowed. Yep, this girl defeated a boogeymen in the previous book, but that is just not enough. And yes, I can kind of understand that they wouldn’t just give her babysitter instantly, but it would be kind of nice as she does deserve it.
Yes, she has a lot to learn. Yes, she needs to practice her skills in both fighting and babysitting (especially babies), but throughout the book I was definitely seeing her as one of the best babysitters there is in the area. She shows that even when faced with something new, a baby, she still does her best, cares for him the best she can and protects him with all her might. She loves him, and I was just so happy to see her find out more new skills.
Plus dang, this girl is just kick-ass. She also tries to get over her fear of spiders (something that is definitely needed given who Serena is and what she employs as minions).

I loved that this book focused on two boogeymen, Serena and Gonzalo. Mostly we see Serena and all the crimes she has committed, what she is, and how far she will go to get what she wants (really really really far in many creepy ways), but we also see Gonzalo and all the horrors he is committing (and dang, I am guessing he will be the next boogeymen on the list? For next book?).

How Serena discovered our babysitter’s hideout was just the dumbest. You would think that a babysitter would know to cover up her tracks, especially when one of the biggest enemies is wandering around nearby. Instead she apparently cared more about a certain person, which OK, is kind cute especially as she hasn’t seen that person in years and thought he was dead or not healthy. But still, come on.

Sorry, but I was seriously shaking my head when our girl goes to say that she doesn’t call boogeymen boogeymen, but instead calls them boogeypeople. For crying out loud. People, pulease. Really, is it needed to make everything neutral? It just seemed a bit too forced. Oh, hey, this is a topic that is hot and happening, let me just make my character say this and that. Totally not out of place or anything. rolls eyes

I also thought it was a bit harsh that everyone was quite mean towards Kelly regarding her babysitting/her becoming a babysitter (officially). I mean, she did all that for them (and more, and does even more in this current book), and what does she get? Nothing. Well not til the end that is. I do have the feeling they may have partially done it because they wanted to protect her, but still, I didn’t quite like this attitude.

We also see Tammy, and I just hope that this girl will see the light and drop the mean girls for once. She seems like such a sweet girl, with some faults but we all got our faults. And she does seem to understand about Kelly’s situation, she even believed her during one moment in the book when things went wrong. And then near the ending, she shared a knowing look with Kelly.

The ending battle that takes place at Serena’s mansion, oh man, that sure was one that I couldn’t stop reading. It was so exciting, so well written. I already flew through the book at top speed, but now I went even faster.

Great that we see some POVs from others. Not many, but definitely a few that gave even more insight on the story and what was going on.
Plus we also have the guide that pops up with some creepy monsters and fantastic stories/information about them. Can we please have a book just about this? A whole guide about the monsters? Separate from the normal books?

The romance between Victor and Kelly, oh my gosh, I was just awwwing the whole time. Though I had to say I was a bit eh when she started about the Fault in the Stars. Oh good grief…. Romantic moment and you ruin it with that reference. Good job. 😐 But other than that, love love love it. I am also happy that Kelly lets Victor come with her. He is definitely a help to the team, and I think he could also become a babysitter if he wants to.

Phew, I probably missed some things I still wanted to say, but I think I got the important things down. I would recommend this book to everyone looking for a creepy, supernatural, fun read with great characters.