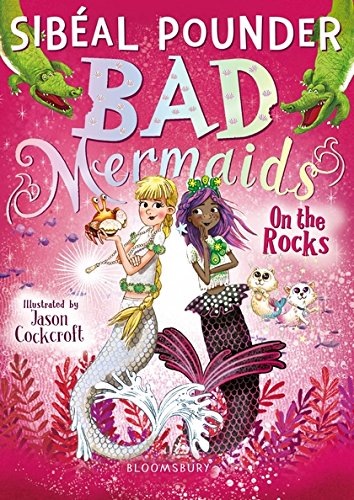 We leave where we left the girls the previous time, stuck in a ship being flung to parts unknown. Steve is getting shipsick/seasick? The girls are trying not to panic too much. And on the other side of the story we see Paris. A girl we already met in a fleeting way in the first book, she is the one who handles the ice cream cart. But she is also much more than that. She also loves inventing and has put a tracker on the mermaids (who the hell puts trackers on people?).

Throughout the book we see Paris POV (well up to the point when she joins the girls), our mermaids POV, and Hilma’s POV (who is helping a few kids search for their missing mercat (yessss, adorableness 10000%). I have to say that I wasn’t sure about Paris and her POV until much later. I don’t know, maybe the whole tracker stuff, and that it was her fault that crap happened and her mom found out about stuff. But sure, I did like that she saved that important person and that she was trying to make up for all she did wrong, and yes, eventually I quite liked her and I was happy that she made such good friends. Plus seeing her being able to switch between mermaid, human, dolphin, crocodile, shark was pretty dang awesome.
My favourite POV was the mermaids. Seeing their friendship, see them discover new places, and also try to, once again, save the day. Though I did feel a bit sorry for Zelda.
Hilma had me in stitches seeing her swim with those kids and try to help them out. I was laughing even harder when we found out THAT. 😛

I loved, just LOVED, that we found out more about the mermaid world. This time we see about a kingdom with crocodiles. Mermaids with crocodiles tails, crocodiles for transport, they had a whole part with lava, shiny buildings. And then the fact that there are even more kingdoms/countries to explore, and I definitely hope that we will be going there as I want to see what mermaids live there and what their life is like. But for now, I guess the next time we are going to Frostopia. Can’t wait to see the frosty awesomeness there.

It was fun that we discover that magic is real, and that there are witches.

Oh, and we found out about Steve! Poor Steve, but then again, maybe this would nudge down his annoying ego a tad more (sorry, Steve is just annoying). But so far it seems it is not working, darn it.

Another great thing was the Maritza Mist’s catalogue pages. I would love to be able to order some stuff from that catalogue and try my hand at the very fun magic stuff in there. Some seem very handy to have.

Our villain, Susan, mother of Paris, was a pretty dang good villain. Crazy like hell, instead of just enjoying the world of mermaids from afar, she wanted to bring everything (homes, roads, mermaids) back with her to the surface. Not satisfied with socks, eh?

The ending was perfect. I loved how everything was resolved, plus adding some new exciting things that makes me want to read the next book.

Of course the book is delightfully illustrated!

I am so delighted to see that this series is going to continue (then again, given the ending it would be weird if there wouldn’t be more books).