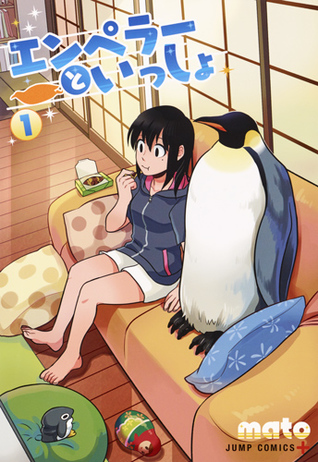 A girl and her emperor penguin and their daily life!

I spotted this one promoted on the VIZ twitter feed, and I was instantly interested. A girl? A penguin? Whut? What kind of silliness could I expect? Would it be more day to day stuff? Or magical?

Now after reading I can tell you that this is simply about a girl and her emperor penguin. A quiet and calm slice of life manga that is sure to make you feel at ease, and also makes you laugh (as there are quite a few funny moments).

Meet Kaho, a very normal high school girl. One day she opens her fridge and finds a penguin in there. She decides to keep him, and lets him pick his name (which is done by putting fish on several pieces of notes with names). Thus the name Emperor is chosen.

Each chapter is quite short, but I think the length is perfect. Any longer and it the jokes would fall flat/not work. With each chapter we learn more about Emperor, see him grow, see him get potty trained (though apparently it wasn’t needed), see him have preferences in food (or act like a dog does and beg when he sees delicious foods), he is also quite the klutz so at times I wondered how the house was still standing. 😛 I think the author did a great job on researching penguins, from how they eat, to the following thing, to the need to have something round under their bellies (even if that thing gets crushed), and I had such a laugh when a killer whale popped up on tv and the poor Emperor just fled. There was also much more. Good job author! thumbs up
We also see Kaho, and her family, try to figure out more about penguins, which I loved. They are really caring fabulously for Emperor, making sure he has the best food, the most hugs, and the best life he could ever wish for.

I also loved how Emperor fell in love with the show Pengu and was even shown being pissed when Kaho’s dad tried to change the channel to sports. RIP Dad.

Later on the ones on in the secret grow by one as Kaho’s neighbor and best friend find out about Emperor. That meeting went as I expected. Emperor knows what is up and doesn’t want any rivals for Kaho’s love. 😛

The art is absolutely amazing and a definite fav of mine (I need more Mato art). Not only are the characters well drawn, but also the penguin and the other animals that make an appearance. Big plus points to the fact that this manga is all in colour! I just love it when manga are in colour.

All in all, I just hope that this manga will one day come out in paperback in English. I do want these on my shelves. And of course I would recommend this fun, slice of life manga about a girl and her penguin to everyone.