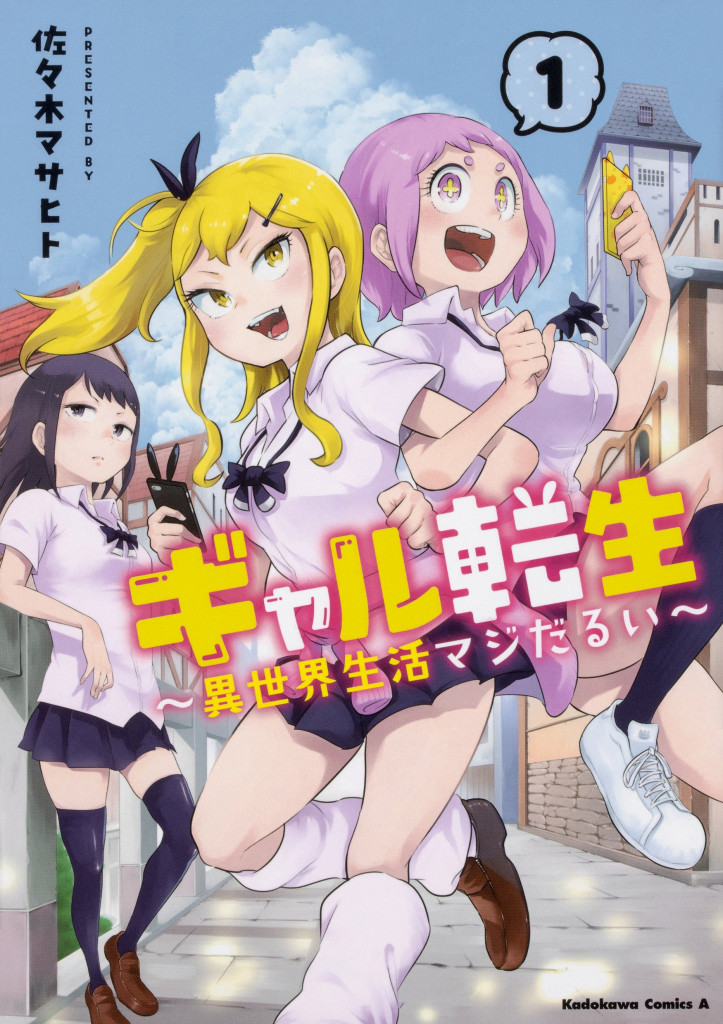 Truck-san heard your plea about the world being boring, and has helped you go to heaven, um, a brand-new world.

I have been meaning to read this book for some time, gals/Gyaru? Isekai? Twitter? Art that reminds me of Coolkyoushinja? Check, check, and more check.

Meet Rinka, Maki, Kokoa, three girls, three friends. My favourite girl is Kokoa, followed by Maki, and then lastly Rinka. They each are quite different. Rinka is the typical gyaru and at times quite eh about stuff, also she expects things to just happen without effort. At times she is quite mean, but I can tell that she is a sweet girl underneath it all. Kokoa is a cute, sweet, but oh so empty-headed girl. She doesn’t know the most basic of things and goes through life in one big bubble. I loved her love for pancakes and how far she goes to eat pancakes in this new world.
Maki is the smart girl out of the 3. She is the one making sure her friends actually get quests (money/place to stay), makes sure she can read the new language, and is the one with the most responsibility. These three seem the most unlikely of friends, but they make it work. They stick together and make the best of the new world.

Then there is Twitter. Yep. These girls have a special skill. They can use Twitter! And that leads to lots of hilarity as we find out more on what the skill entails. Rinka barely has followers (but then again she mostly talks about all the boring and not so good stuff), Kokoa is definitely winning (but then again she has some lewd shots (though she does them without knowing they are lewd), and Maki is just doing her own thing and is second in the Twitter follower count.
I just adore that even in a new world they can use Twitter. We also see them ask people in the real world for advice (like when they had to defeat the slimes), and one page we even see people in the real world discussing these tweets (are they real or not?).

I loved these girls and what they did with the slimes. That is one hell of a sales pitch, though I do think it is best not to tell the people the ingredients of that potion. 😛

Seeing them go on quests, get used to the new world sure was fabulous to read, and I can’t wait to read more of their adventures in the future. Plus, will they ever get back to the real world? Or are they dead in that world?

Trunks transporting people to other worlds is a popular topic in manga and anime these past years. It is a trope I sure don’t mind. Sure, it gets a bit ridiculous at times. As most of the time the MC getting hit by a truck is a NEET or a not so interesting guy. But this time we have three gals/Gyaru getting thrown into another world. Plus, something that made me laugh even harder, was that they have make fun/mention the truck bringing people to other worlds (even showing stuff like Re:Zero). Nice touch artist, nice touch!

Sadly, I have to say that the addition of a friend they know, a guy who has been in this world for ages, wasn’t my favourite. Not at all. Kinoshita/Weiss is a rude, weird, eh dude and I just didn’t like him. As the story progressed I started to dread the parts that included him. His rudeness is funny once (especially considering the relationship he has with these girls), but later on it just starts to get frustrating and I wanted to have him gone. But no, he is here to stay. Sadly. I may have been a bit more forgiving it it was just the girls meeting him at times while going through quests and eating pancakes, but he also gets parts. 😐

The art, well as I said it reminds me of Coolkyoushinja. It was a really fun art style, for instance I quite like Kokoa’s eyes.

Definitely a series I can’t wait to read further. Oh so much fun!