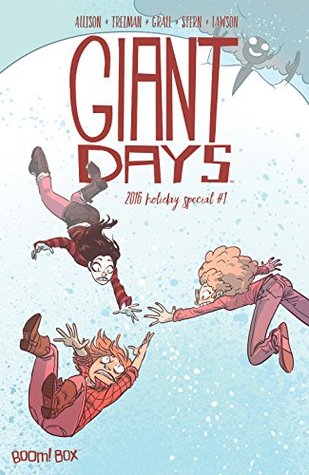 Totally not the season for this one, but I just couldn’t wait until it was December. So Christmas in June it is!

This was such a delightful issue. Though I have to say that I loved the first one, didn’t like the second one that much (it was just not for me).

The first story is about the what-ifs. What if Susan, Esther, and Daisy hadn’t become friends on that first day of university? What if something happened that made them not connect together. Something like DAY-ZEE (you may guess who this DAY-ZEE is) blocking Esther’s pass and thus her not helping out Daisy and thus Esther ending with the mean girls of the university and Daisy becoming a hermit. It was definitely interesting to see the girls not together, and also quite at war at each other. Daisy is being bullied by the mean girls, Susan hates the mean girls for various reasons, and is not all too happy about Daisy cranking up Enya all day. 😛 Daisy, girl, if you feel crappy maybe something more rockish or metalish works better than Enya. Don’t get me wrong, I adore Enya, but it is not something I would turn up if I feel shitty. I just adored seeing this alternate universe and it certainly was interesting. Neither girl was that happy (well, Susan was just her old grumpy self). I liked that this story shows us that destined and fated forever friendships are not to be stopped. These girls will become friends, even if the universe has thrown some obstacles in their path to each other. How they get together was just a delight and I was cheering for them all.

I loved that the POV switched from girl to girl. We see Esther and her new friends getting drunk and high all the time (and no Esther is not having a good time), Daisy is trying to survive university, Susan is trying not to tackle the Enya blasting neighbour (Daisy) and also tries to make Christmas something for her and Ed.

Their plan to give a bit of karma to the mean girls was fun, though McCraw certainly took away the price for best revenge. Dang boy, that is just way too epic. claps

I loved the ending, oh boy I hadn’t expected that to happen. Poor Daisy. Christmas decorations are dangerous!

The second story was just too weird and I just didn’t like it at all. Some weird fishgirl/boy steals a turkey, gets invited, and then later that happens? Whut? They could have skipped this one and just let the issue end with the main story.

The art, well at least in the first story, was fabulous. I just love it! All in all, I guess I will be reading the other Holiday special in a bit as I am in the mood for more Giant Days.