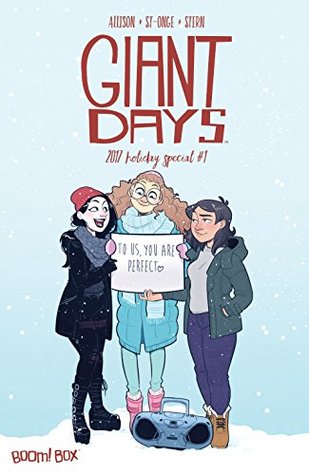 More Christmas! In June! With Romance!

I guess maybe I should have seen it coming that I wouldn’t like this one as much as I normally love Giant Days. I never seen Love Actually (not a big fan of romance movies), and since this one is a tribute to that movie… It also didn’t help that the art was totally different from the normal Giant Days. And it wasn’t a favourite. Sorry, the style was kind of nice, but it just didn’t give me Giant Days vibes. Like this was a fanmade issue instead of an official one.

Plus the story was just so over the top and yet strangely boring at the same time, that I just didn’t enjoy it that much. I did like seeing the girls go to London for the holidays (especially now that I visited the place myself this year) and how that amazed two of them (Daisy who never has been to London, and Esther who only has been to London for a school trip). And that we are seeing a new character with quite an interesting life (and maybe a bit of an alcohol problem). She was just like the girls (only a bit more responsible about things), and I loved that.

I liked seeing them walk through London and have a, generally, good time (with the exception of what happened, thankfully Susan is kickass). Next to walking through London, we see them at Shelley’s home (which has some magical hidden bunk beds) or at Shelley’s work.
But when Esther and Susan went through London, and then Susan’s stories. Oh my gosh, I was just laughing so hard. That is Susan for you, daring to do all the things and not giving a rat’s ass about anything.

There is quite a bit of romance as Shelley is being wooed by two boys. One lives in her apartment building and has my seal of approval, the other is a guy on a motorcycle and doesn’t have my seal of approval. Especially what happened during the date near the end. You just don’t do that. I hope that Shelley will pick the right guy.
As for the camera guy at work? I knew he liked from the start, it was quite hilarious that Esther just didn’t seem to realise it. 😛

The ending had me in stitches though. Especially how Shelley just didn’t care any more and just chugged some more alcohol in her body.

All in all, I had expected more, maybe one should have seen the movie this issue is doing a tribute to. Oh well, still happy I had the chance to at least read this issue. Now just a bit longer until the next volume comes out.