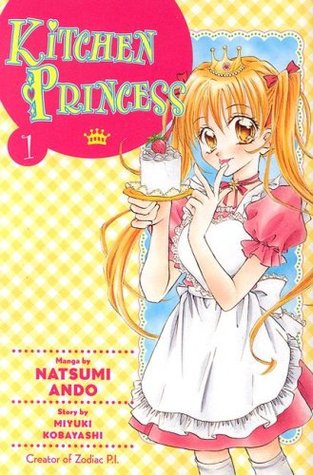 Welcome to a manga about a girl who can cook anything perfectly. 😛

This one is my pick for Copycat Challenge June in one of my groups. It looked really adorable, plus was about cooking so how could I resist.

However, I have to say that, maybe just maybe, I should stay away from shoujo. Or at least shoujo like this. I just couldn’t help but noticing all the cliché stuff. Like her being saved as a kid by a cute kid, her having some kind of memento that will lead her to him, then at the school she meets two boys, one (duh) grumpy, the other one charming (oh, and did I mention study body president?). Also both of them are sexy as hell. She falls out of a tree on the grumpy one and of course he has some words to tell her (as predicted). Oh, and the two guys? Brothers. And they aren’t in good books with each other. Something made by a girl (the clumsy but cute one) gets thrown on the ground by one of the guys and of course our MC goes completely in awesome mode and steps up. And that is just the first few pages. 😛 I could really go on about the cliché stuff that I see popping all the time. I know I never had this problem when I first started reading shoujo many years ago, but I guess reading so many of it, and also watching shoujo anime, has shown me that most are riddled in cliches used in every shoujo manga, and now I can’t unsee them.
Oh, and not to mention the standard art for shoujo with the standard glitter and random eyes in random scenes.

But sure, this was a cute manga about a cute girl who goes to a school based on a spoon she got from the boy who saved her. For the first time in her life she has a room for herself, but the school isn’t all that she thought it was. I felt pretty sorry that she was being bullied like that (then again, I also couldn’t help but roll my eyes to the heavens at it), come on guys. Just because you can’t see the reasons why she was enrolled in your superfancy class, doesn’t mean she is worthless and needs to be bullied like this. Give her a chance to at least show her stuff.
I quite liked that they went for a competition to have her show her worth. Of course, while I knew the outcome, I was still rooting for our girl. Go go go!

I would have liked to see more classes. Cooking, normal, anything really. Maybe some good healthy competition.

I am really surprised that our MC didn’t get that Akane had bad intentions. I get that seeing the good in someone is important, but really, how can you not see that side glances, the tiny little things she does to instrument something to happen? That girl has such a bad vibe over her. Then again, I don’t live in a shoujo world, maybe I should live there, maybe you can’t see anything there.

Sorry, it was probably meant to be a moment of aww, but instead I was just laughing and rolling my eyes when our MC did that for Christmas. 😛 It just felt so over the top, plus it kind of broke my mood/atmosphere of the previous scenes. It just made it seem like either our MC has serious issues with her mood, or is a bouncy ball and as soon as she hits the ground the next moment she is in the air (and thus happy).

snorts OMG, I totally called it that Sora and Daichi were sons of x. Hah! cackles Oh, and of course Akane is their childhood friend. Why the hell not?

Also what the hell is up with those eyes after what Akane did? Did the author just give up on drawing? Dang man, even horror manga have better eyes. Sorry, it was a sad moment, but those eyes ruined it.

Can that girl cook/make anything? Is she a walking mega-cookbook? Sorry, it just seems a bit weird that she knew so much and then also could apply them perfectly. She never makes one mistake, and I would rather have seen her falter a bit at times to make her more real, more likeable. Now she was just a bit too magical for me.

Oh, and I am taking a bet that she is going to fall in love with both boys, but end up with the grumpy one. grins

So yeah, if I don’t see/ignore the cliché stuff and weird typical shoujo mood swings and some other stuff, this one is actually a pretty decent shoujo manga. It has fun characters, a fun story, cooking is always good in my book, romance, and of course how can I resist an awesome school with a dormitory (my favourite setting). But will I be continuing this? No, I am definitely taking a break from Shoujo manga. Though I may just make an exception for Ouran if I want to re-read that one.