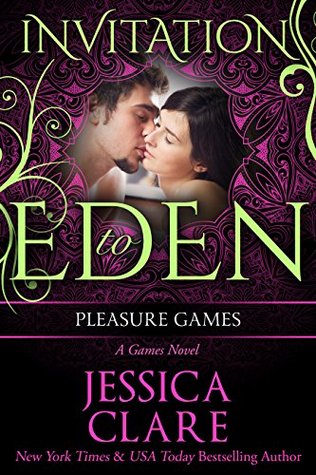 Welcome to a dating show… with a twist!

I have to say that while this book is called Pleasure Games there was little pleasure or games. 😛 But I still had tons of fun reading this one, and I loved the dating show element (even if it was 110% rigged).

Meet our MC, Juno (loving her name), she is a glass blower/artisian and isn’t having the greatest time, her finances are at an all time low, so when her best friend convinces her to participate with a dating show that promises all contests a flat 50k fee just for participating she is in (well, with some convincing from her friend). I just adored that Juno had such an unusual job, I haven’t read many books that feature someone having this job. I had lots of fun reading her reactions to Heathcliff, her ex. She sure was pissed at the dude, but I also love that she was slowly starting to change as the days passed in the resort. She was definitely jealous when he picked another girl, when he had more attention for someone else. It just made me snicker. You can try all you want girl, but your body is clearly telling you to just go for it. Just forgive him already, besides you were also wrong in the whole affair, and just go for it.

I knew right from the bat that his whole show was rigged, thanks to the comments at the beginning of the chapters. Sure, I didn’t know who Heathcliff was until he was introduced, but then it all clicked. I have to say at first I found it quite creepy that he would go through such lengths to get his girl back, but after a while I found it quite cute that he tried all sorts of things and then just settled for a dating show to get Juno back. Hey, the guy is dedicated. He is trying to say sorry, and also talk to her and try to make a future with her again.

I loved that Juno had a friend with her on the inside, someone who totally understood Juno’s POV on Heathcliff, and also was happily supporting them, though of course also wanting her to be honest, because Leona was definitely interested in Heathcliff. Leona was just the best, and she had some of the best comments in the book.

Heathcliff? Sorry to say but he reminded me of an old vampire. The way he talked, the way he acted, the way he charmed girls, everything. So I am sorry, I just couldn’t unsee it after that. But I did like the guy.

And of course, like any dating show, we had our share of mean/bitchy girls or girls wayyyyy to desperate.

Oh, and the reason why Heathcliff and Juno broke up? I have to say I wasn’t happy with both of them, though I can imagine why Heathcliff was pissed. Come on girl, you didn’t even talk to him, instead you decided that the best course of action was to walk away in the midst of the night. Not even talking to her boyfriend about her plans, or to talk to him about how she felt. Of course poop hit the fan. In the end both of them were at fault, though I can kind of forgive Heathcliff. It was quite interesting that at first it seemed it was all his fault, but then we find out the truth.

Unlike most of the books in this series, this one was very tame. There is one sex scene near the end and that is it. It was still a very steamy sex scene so it more than made up for the lack of it.

All in all, I quite enjoyed this one and I would recommend it. I hope that the author will continue to write more Games books.